listen (help·info)) (Chinese: 青海; pinyin: Qīnghǎi; Wade–Giles: Ching Hai, pronounced [tɕʰíŋxàɪ̯]); Oirat Mongolian: Көкнуур (transcribed into Cyrillic); Tibetan: མཚོ་སྔོན་; Salar:[citation needed]) is a province of the People's Republic of China, named after Qinghai Lake. It borders Gansu on the northeast, the Xinjiang Autonomous Region on the northwest, Sichuan on the southeast, and Tibet Autonomous Region on the southwest.

A large part of Qinghai, until the early 20th century most often referred to by its Mongol name Kokonur in English, lies outside of China proper and has been an ethnic melting pot for centuries, mixing Tibetan, Mongol, Turkic, Han Chinese influences. Although it preserved cultural and ethnic ties with central Tibet, it was ruled by local authorities during the last several centuries. It was a battleground during the Tang and subsequent Chinese dynasties when they fought against successive Tibetan tribes.[1]

In the middle of 3rd century CE, nomadic people related to Xianbei migrated to pasture lands around Koko Nur (Qinghai Lake) and established Tuyuhun Kingdom. Since the 7th century, Tuyuhun Kingdom was attacked by both Tibetan Empire and Tang Dynasty as both of them sought control over trade routes. Military conflicts severely weakened the kingdom and it was incorporated into Tibetan Empire. After the disintegration of Tibetan Empire, small local factions emerged. They were under titular authority of China and Tibet but maintained their autonomy. During the Mogolian rule, majority of Qinghai belonged to one of the three commandaries of Tibet, Amdo.

Tibetans reclaimed their independence from Yuan Dynasty in middle 14th century. Ming Dynasty claimed to have succeeded Mongol's authority over Tibet and remained as nominal ruler of the modern Qinghai region.

The Salars, who now live in the eastern outskirt of Qinhai province (Xunhua Salar Autonomous County), joined the Ming Dynasty around 1370, although the clans remained virtually independent in administration.[2]

From the late Ming to 1724, a big part of the area that is now Qinghai was under Khoshut Mongol control, but in that year it was conquered by the armies of the Qing Dynasty.[3] It was during 1720s when Xining Prefecture was established, despite its closeness to the rest of the Tibet, and its borders were roughly those of nowaday Qinghai province. Xining, the capital of modern Qinghai province was built in this period as the administrative center. During the rule of Qing Dynasty, the governor was a viceroy of the Qing Emperor, but the local Tibetans and other ethnic groups enjoyed much autonomy. Many chiefs retained retained their traditional authority, participating in local administrations.[4] The Dungan revolt (1895–1896) broke out in Qinghai in 1895. Following the overthrow of the Qing Dynasty, the region came under Chinese Muslim warlord Ma Qi control until the Northern Expedition by the Republic of China consolidated central control in 1928. 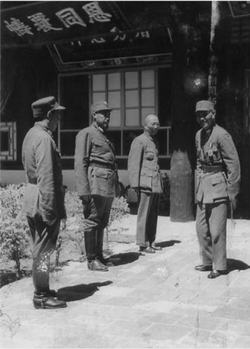 Political and military leader of Nationalist China Chiang Kai-shek(right) meets with the Muslim Generals Ma Bufang (second from left), and Ma Buqing(first from left) in Xining, Qinghai at August 1942.

In 1928, Qinghai province was created. Previoiusly, it was part of Gansu province, as the "Tibetan frontier district".[6][7]

Subsequently it became the primary base for the Muslim warlord Ma Bufang, before the Chinese Civil War ended and the People's Republic of China established with control over Qinghai and most of the rest of mainland China in 1949.

In 1932 Tibet invaded Qinghai, attempting to capture parts of southern Qinghai province, following contention in Yushu, Qinghai over a monastery in 1932. The army of Ma Bufang's defeated the Tibetan armies.

Governor of Qinghai, Ma Bufang was described as a socialist by American journalist John Roderick and friendly compared to the other Ma Clique warlords.[8] Ma Bufang was reported to be good humoured and jovial in contrast to the brutal reign of Ma Hongkui.[9]

Most of eastern China was ravaged by the Second Sino Japanese war the Chinese Civil, by contrast, Qinghai was relatively untouched.

An American scholar and government advisor, Doak Barnett, praised Ma Bufang's government as "one of the most efficient in China, and one of the most energetic. While most of China is bogged down, almost inevitably, by Civil War, Chinghai is attempting to carry out small-scale, but nevertheless ambitious, development and reconstruction schemes on its own initiative"

General Ma started a state run and controlled industralization project, directly creating educational, medical, agricultural, and sanitation projects, run or assisted by the state. The state provided money for food and uniforms in all schools, state run or private. Roads and a theater were constructed. The state controlled all the press, no freedom was allowed for independent journalists. His regime was dictatoral in its political system. Barnett admitted that the regime had "sterm authoritarianism" and "little room for personal freedom".[10] 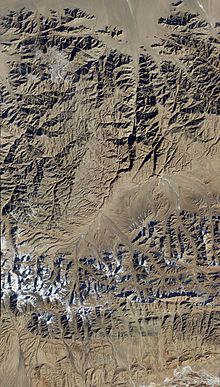 Qinghai is located on the northeastern part of the Tibetan Plateau. The Yellow River (Huang He) originates in southern part of the province, while the Yangtze and Mekong have their sources in the southwestern part.

By area, Qinghai is the largest province in China - excluding autonomous regions, which are technically not provinces; but if they were, Xinjiang would be the largest.

Qinghai Lake (Koko Nor) is the largest salt water lake in China, and the second largest in the world.[citation needed]

Qaidam basin lies in northwestern Qinghai. About a third of this resource rich basin is desert. The basin has an altitude between 3000 to 3500 meters.

The Sanjiangyuan National Nature Reserve (SNNR), also referred to as the Sanjiangyuan Nature Reserve, or the Three Rivers Nature Reserve, is the area of Qinghai province, PRC which contains the headwaters of the Yellow River (Huang He), the Yangtze River (Chang Jiang), and the Mekong River (Lancang Jiang). The SNNR was established to protect the headwaters of these three rivers. The reserve consists of 18 subareas, each containing three zones which are managed with differing degrees of strictness.

All of these are in turn divided into four districts, two county-level cities, thirty counties, and seven autonomous counties. 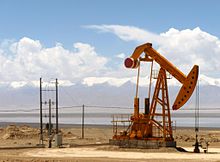 Its heavy industry includes iron and steel production, located near its capital city of Xining. Oil and natural gas from the Chaidamu Basin have also been an important contributor to the economy.[12]

Outside of the provincial capital, Xining, most of Qinghai remains underdeveloped. Qinghai ranks second lowest in China in terms of highway length, and will require a significant expansion of its infrastructure to capitalize on the economic potential of its rich natural resources.[13]

Xining Economic & Technological Development Zone (XETDZ) was approved as state-level development zone in July 2000. It has a planned area of 4.4 square kilometers. XETDZ lies in the east of Xining, the capital city of Qinghai Province, 5 kilometers away from downtown. Located in the east of the province, Xining stands at the upper reaches of the Huangshui River-one of the Yellow River's branches. The city is surrounded by the mountains with an average elevation of 2261 meters and the highest at 4393 meters. Xining Economic and Technological Development Zone (XETDZ) is the first of its kind at the national level on the Qinghai-Tibet Plateau. It is established to fulfill the nation's strategy of developing the west.

XETDZ enjoys a convenient transportation system, connected by the Xining-Lanzhou expressway and run through by two main roads, the broadest roads of the city. It is 4 kilometers away from the railway station, 15 kilometers from Xi'ning Airport, a grade 4D airport with 14 airlines to other cities such as Beijing, Guangzhou, Shanghai, Chengdu and Xi'an. Xining is Qinghai province's passage to the outside world, a transportation center with more than ten highways, over one hundred roads and two railways, Lanzhou-Qinghai and Qinghai-Tibet Railways in and out of the city.

The Dongguan Mosque in Qinghai

Qinghai's culture is heavily influenced by China proper and Tibet, given the close proximities as well as a shared history.

See also: Transport in the People's Republic of China

The Lanqing Railway, running between Lanzhou, Gansu and Xining, the province's capital, was completed in 1959 and is the major transportation route in and out of the province. A continuation of the line, the Qinghai-Tibet Railway via Golmud and western Qinghai, has become one of the most ambitious projects in PRC history. It was completed in October 2005 and now links Tibet with the rest of China through Qinghai.

Xining Caojiabu Airport provides service to Beijing, Lanzhou, Golmud and Delingha. Smaller regional airports, such as Golmud Airport and Yushu Batang Airport, serve some of the local centers of the far-flung province; plans exist for the construction of three more by 2020.[15]

Since the Ministry of Information Industry began its "Access to Telephones Project", Qinghai has invested 640 million yuan to provide telephone access to 3860 out its 4133 administrative villages. At the end of 2006, 299 towns had received Internet access. However, 6.6 percent of villages in the region still have no access to the telephone. These villages are mainly scattered in Qingnan Area, with 90 percent of them located in Yushu and Guoluo. The average altitude of these areas exceeds 3600 meters, and the poor natural conditions hamper the establishment of telecommunication facilities in the region.

Satellite phones have been provided to 186 remote villages in Qinghai Province as of September 14, 2007. The areas benefited were Yushu Tibetan Autonomous Prefecture and Guoluo Tibetan Autonomous Prefecture. Qinghai has recently been provided with satellite telephone access. In June 2007, China Satcom carried out an in-depth survey in Yushu and Guoluo, and made a special satellite phones for these areas. Two phones were provided to each village for free, and calls were charged at the rate of 0.2 yuan per minute for both local and national calls, with the extra charges assumed by China Satcom. No monthly rent was charged on the satellite phone. International calls were also available. 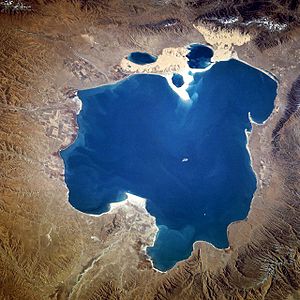 Many tourist attractions center on Xining, the provincial seat of Qinghai.

During the hot summer months, many tourists from the hot Southern and Eastern parts of China travel to Xining, as the climate of Xining in July and August is quite mild and comfortable, making the city an ideal summer retreat.

Qinghai Lake (青海湖, qīnghǎi hú) is another tourist attraction, albeit further from Xining than Kumbum. The lake is the largest saltwater lake in China, and is also located on the "Roof of the World," the Tibetan Plateau. The lake itself lies at 3,600m elevation. The surrounding area is made up of rolling grasslands and populated by ethnic Tibetans. Most pre-arranged tours stop at Bird Island (鸟岛, niǎo dǎo). An international bicycle race takes place annually from Xining to Qinghai Lake.

Also see List of universities and colleges in Qinghai