Melbourne City Centre
This article is about the locality within the postcodes 3000, 3004 and 3006 of Melbourne in Victoria, Australia, officially known as "Melbourne". For the Greater Melbourne metropolitan area, see Melbourne. For the local government area that envelopes the locality, as well as some inner suburbs, see City of Melbourne.

Melbourne City Centre (sometimes referred to as "Central City",[2] and colloquially known as simply "The City") is an area of Melbourne in Victoria, Australia. It is not to be confused with the larger local government area of the City of Melbourne. It is the area in which Melbourne was established in 1835,[3] and its boundaries are defined by the Government of Victoria's Melbourne Planning Scheme.[4] Today, it comprises the two oldest areas of Melbourne; the Hoddle Grid and Queen Victoria Market, as well as sections of the redeveloped areas of Southbank and South Wharf.[5]

It is the major central business district (CBD) of Greater Melbourne's metropolitan area, and a major financial centre in Australia and the Asia-Pacific region.[6] The City is home to the corporate headquarters of the World's two largest mining companies: BHP Billiton and Rio Tinto Group; as well as two of Australia's "big four" banks: ANZ and NAB, two largest gaming companies: Crown and Tabcorp, largest telecommunications company Telstra, two largest transport management companies: Toll and Transurban as well as the iconic brewing company Foster's Group. It also serves as the main administrative centre for the City of Melbourne and the Government of Victoria – the latter with the suburb of East Melbourne. Two universities have major campuses in the area: Royal Melbourne Institute of Technology (RMIT City campus) and University of Melbourne (Victorian College of the Arts).

It has hosted a number of events of significance, which include: the 1901 inauguration of the Government of Australia, 1956 Summer Olympic Games, 1981 Commonwealth Heads of Government Meeting, 1995 World Police and Fire Games, 2000 World Economic Forum, 2006 Commonwealth Games and G20 Ministerial Meeting. It is also recognised for the substantial number of cultural and sports events and festivals it holds annually – many being the largest in Australia and the World. The Hoddle Grid is home to Melbourne's famed alleyways and arcades and is renowned for its distinct blend of contemporary and Victorian architecture as well as expansive parks and gardens which adjoin it edges.[7] It is also the literary centre of Australia, and has more bookshops and publishing companies per capita than any other city in Australia, and includes the headquarters of the World's largest travel guidebook publisher Lonely Planet. In 2008, it was designated a "City of Literature" by UNESCO in its Creative Cities Network.[8]

Melbourne's central grid patterned layout, known as the Hoddle grid, was first laid out in 1837. From the 1870s to 1920s, the central part of Melbourne was home to mostly medical professionals who had established practices along Collins Street and Spring Street[9] and before the 1960s, only a handful of permanent residents lived in the Spring Street area and St Kilda Road. The area was largely unpopular for residents and council policies did not permit development of apartment style housing in the area.

St Kilda Road was annexed in the 1960s and given the postcode of Melbourne 3004 to stimulate office development along the strip and reduce pressure on overdevelopment of the Hoddle Grid. The result was the demolition of many of the street's grand mansions.

Things changed somewhat due to the Kennett government's Postcode 3000 planning policy in the 1990s, which provided incentives for living in the central area. 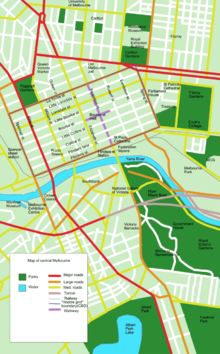 Map of Melbourne City Centre (with some inner suburbs) 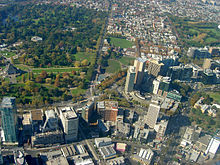 An aerial view of part of the St Kilda Road office district and the Botanic Gardens area.

Although these are the borders on official maps, there are several adjoining areas that function as part of the Central Activities District. This includes Melbourne Docklands (with Docklands Stadium), Southbank, Victoria and East Melbourne/Jolimont (with the Melbourne Cricket Ground).

Central Melbourne has one of the fastest growing residential populations in Australia. Residents of the city centre are of mixed social status.[11] On one hand, living in the centre of the city offers proximity to work and the best access to public transport. On the other hand, there are many strata titled studio apartments that have no carparks and limited space. As a result there is a mix of students and young urban professionals living in the locality of Melbourne.

Jetstar Airways has its head office in the suburb.[12][13] 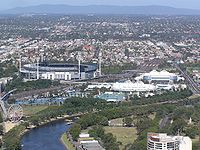 Most professional sporting clubs represent Greater Melbourne (e.g. Melbourne Victory, Melbourne Storm). An exception is the Melbourne Cricket Club and Melbourne Football Club (its offshoot) both based at the Melbourne Cricket Ground which was built in Jolimont, adjacent to the city but a locality of the suburb of East Melbourne. Both were the first clubs of their respective sports and established in a time when the city's population was still very small and limited to a handful of inner suburbs. As a result, the Melbourne Cricket Club has a fairly exclusive membership, whilst the Melbourne Football Club, although bearing the name Melbourne, is associated by the supporters of other suburban clubs as representing the central suburb and perceive its supporters to represent the locality and not the entire city.[14] As a result, despite its rich tradition and early success, it is one of the least supported clubs in the VFL/AFL. The lack of identity resulted in a push for the Melbourne Hawks, which was stopped by intervention from Joseph Gutnick and the majority of the Hawthorn Football Club members. It has had intense rivalries with younger clubs from the adjacent inner suburbs such as the Collingwood Football Club and early inter-town rival Geelong Football Club. The Melbourne Football Club has recently made efforts to shed its suburban tag and be embraced by the whole metropolitan area.[15] In line with this, the club recently employed strategies such as establishing Team Melbourne, (a group of sporting teams which bear the name "Melbourne"), and a strategy for promoting the brand as representing the city in China through club supporter and former Lord Mayor John So.

Golf is played at the course of the Albert Park Golf Club on Queens Road.[16] 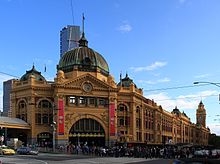 The Melbourne City Centre is the transport hub of the city.

Despite a wide range of public transport options, the automobile still remains the primary method of getting around in the Melbourne City Centre. The main arterial is King Street. There are major taxi termini in the CBD.

The city is serviced by five railway stations as part of the Melbourne Underground Rail Loop: Flinders Street (the busiest), Southern Cross Station (the hub of the regional network in Spencer Street at Melbourne Docklands) also an interstate terminal and three underground stations - Parliament, Melbourne Central and Flagstaff (not open on weekends) stations. Flinders Street Station is also the hub for Melbourne's suburban train network.

The city is also well connected by bus services, with majority of buses running down Lonsdale street. Major bus stops include Melbourne Central and QV. Most bus routes service suburbs north and east of the city given the lack of train lines to these areas.

Major bicycle trails lead to the CBD and a main bicycle path down Swanston Street.

Ferries dock along the northbank of the Yarra at Federation Wharf and the turning basin at the Aquatic Centre. There is also a water taxi service to Melbourne and Olympic Parks.