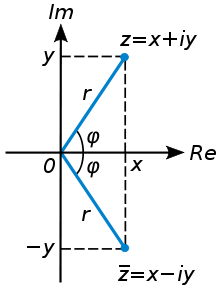 Geometric representation of z and its conjugate

in the complex plane

In mathematics, complex conjugates are a pair of complex numbers, both having the same real part, but with imaginary parts of equal magnitude and opposite signs.[1][2] For example, 3 + 4i and 3 − 4i are complex conjugates.

The conjugate of the complex number z

where a and b are real numbers, is

An alternative notation for the complex conjugate is

notation avoids confusion with the notation for the conjugate transpose of a matrix, which can be thought of as a generalization of complex conjugation. The star-notation is preferred in physics while the bar-notation is more common in pure mathematics. If a complex number is represented as a 2×2 matrix, the notations are identical.

Complex numbers are considered points in the complex plane, a variation of the Cartesian coordinate system where both axes are real number lines that cross at the origin, however, the y-axis is a product of real numbers multiplied by +/- i. On the illustration, the x-axis is called the real axis, labeled Re, while the y-axis is called the imaginary axis, labeled Im. The plane defined by the Re and Im axes represents the space of all possible complex numbers. In this view, complex conjugation corresponds to reflection of a complex number at the x-axis, equivalent to a 180 degree rotation of the complex plane about the Re axis.

In polar form, the conjugate of reiφ is re − iϕ. This can be shown using Euler's formula

Pairs of complex conjugates are significant because the imaginary unit i is qualitatively indistinct from its additive and multiplicative inverse − i, as they both satisfy the definition for the imaginary unit: x2 = − 1. Thus in most "natural" settings, if a complex number provides a solution to a problem, so does its conjugate, such as is the case for complex solutions of the quadratic formula with real coefficients.

These properties apply for all complex numbers z and w, unless stated otherwise, and can be easily proven by writing z and w in the form a + ib.

(note the reversed arguments if z and w don't commute)

if and only if z is real

for any integer n

if z is non-zero

The latter formula is the method of choice to compute the inverse of a complex number if it is given in rectangular coordinates.

if z is non-zero

is a holomorphic function whose restriction to the real numbers is real-valued, and

Consequently, if p is a polynomial with real coefficients, and p(z) = 0, then

is a homeomorphism (where the topology on

is taken to be the standard topology) and antilinear, if one considers

as a complex vector space over itself. Even though it appears to be a well-behaved function, it is not holomorphic; it reverses orientation whereas holomorphic functions locally preserve orientation. It is bijective and compatible with the arithmetical operations, and hence is a field automorphism. As it keeps the real numbers fixed, it is an element of the Galois group of the field extension

. This Galois group has only two elements:

and the identity on

. Thus the only two field automorphisms of

that leave the real numbers fixed are the identity map and complex conjugation.

Use as a variable

Once a complex number z = x + iy or z = ρeiθ is given, its conjugate is sufficient to reproduce the parts of the z-variable:

Thus the pair of variables

also serve up the plane as do x,y and

and θ. Furthermore, the

variable is useful in specifying lines in the plane:

is a line through the origin and perpendicular to

since the real part of

is zero only when the cosine of the angle between

is zero. Similarly, for a fixed complex unit u = exp(b i), the equation:

determines the line through

in the direction of u.

These uses of the conjugate of z as a variable are illustrated in Frank Morley's book Inversive Geometry (1933), written with his son Frank Vigor Morley.

The other planar real algebras, dual numbers, and split-complex numbers are also explicated by use of complex conjugation.

Taking the conjugate transpose (or adjoint) of complex matrices generalizes complex conjugation. Even more general is the concept of adjoint operator for operators on (possibly infinite-dimensional) complex Hilbert spaces. All this is subsumed by the *-operations of C*-algebras.

One may also define a conjugation for quaternions and coquaternions: the conjugate of a + bi + cj + dk is a − bi − cj − dk.

Note that all these generalizations are multiplicative only if the factors are reversed:

Since the multiplication of planar real algebras is commutative, this reversal is not needed there.

There is also an abstract notion of conjugation for vector spaces V over the complex numbers. In this context, any antilinear map

is called a complex conjugation, or a real structure. As the involution

is antilinear, it cannot be the identity map on V. Of course,

-linear transformation of V, if one notes that every complex space V has a real form obtained by taking the same vectors as in the original set and restricting the scalars to be real. The above properties actually define a real structure on the complex vector space V.[3] One example of this notion is the conjugate transpose operation of complex matrices defined above. It should be remarked that on generic complex vector spaces there is no canonical notion of complex conjugation.