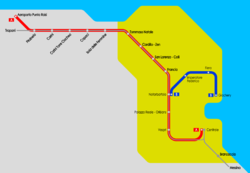 Diagrammatic route map of the system

The Metropolitana di Palermo is an urban railway system owned by Trenitalia, divided into two lines that serves the city of Palermo in Sicily, southern Italy.

There are two lines:

The first section of the Palermo "metropolitana" was Line B, which opened in 1990, a month before the beginning of Italia 90, the football World Cup.

At the beginning the line had only six stations: Palermo Centrale railway station (Italian: Centrale, Vespri-Policlinico, Notarbartolo, Imperatore Federico-Stadio, Fiera and Giachery. The line uses the tracks of the old Palermo – Trapani railway, running across the city until Notarbartolo station, and from there it follows the branch to the port, along which new stops were built.

In May 1993, three years after the opening of the first line, the second Line A was opened, on the tracks of the railway to Trapani, running diesel locomotives. The first two stops were San Lorenzo-Colli and Tommaso Natale. In 1994 stops at Francia and Cardillo-Zen were opened. Once Line A had opened Line B was reduced to a short run on the old branch between Notarbartolo and Giachery.

With the doubling of railway tracks Palermo-Trapani (currently a single track between the stations Orleans and Carini), line A will be enhanced with the establishment of a greater number of runs, it will also reduce journey times. Work also includes the removal of all level crossings citizens and neighboring communities through all'interramento some sections of line or moving in the trenches, with the construction of overpasses for crossing. 12 stops will be added to new construction: Ficarazzi, Roccella, Guadagna, Palazzo di Giustizia, Lolli, Lazio-Restivo, Belgio, La Malfa, Sferracavallo, Kennedy, Torre Ciachea, Orsa. Finally, the Metro A will be extended to Ficarazzi on line for Messina, becoming connected through. Work began Feb. 22, 2008.

The route has already been amended in 1993 when he left the middle section - Notarbartolo. Line B will be completely transformed the remainder is obtaining a complete ring, extending from Piazza Giachery Notarbartolo with new stops in Porto, and Malaspina Politeama-Catania. The new route will be underground. On existing deals will open the new stop-Lazio Freedom. Given the brevity of these is expected to double track. Work has temporarily stopped because of an appeal made by the firm came second in awarding the contract.

Metro C and D are two subway lines automated (driverless), similar to the Turin Metro. Even if they are indicated by two separate letters, it is actually a single line, crossing the city from north to south, with two distinct pathways in the central section. The C line will touch the stadium, the line D Notarbartolo station. There is currently award the contract for final design. At the moment the situation is stationary, we say that we can start talking underground early in 2011