The London museum was officially opened at the Colindale (then part of Hendon) London site on 15 November 1972 by Her Majesty The Queen. The hangars housed just 36 aircraft at opening. Over the years, the collection increased and aircraft were stored at RAF stations around the country when they were not on display. While they were being so stored, these aircraft were not publicly displayed.

On 1 May 1979, the Cosford site was opened at RAF Cosford, one of the RAF stations which had been used to store the museum's collection of aircraft. On opening, the museum initially exhibited airframes which had been used for technical training at RAF Cosford. In the following years additional aircraft were added to the collection and in 1980 it was agreed that the British Airways Collection be displayed at Cosford. On 21 June 1998 four additional galleries were opened, housing art, temporary exhibitions and other aviation subjects. 13 May 2002 saw the relocation of the RAF Museum Conservation Centre from Cardington, Bedfordshire to Cosford. The Centre, costing £2.4 million, was opened by Marshal of the Royal Air Force Sir Michael Beetham and is named after him.[2]

The Cosford site includes several developmental aircraft such as those that led to the English Electric Lightning and the second prototype of the BAC TSR-2.

In 1980, the Cosford site agreed to house the British Airways Museum collection. In 2006 British Airways withdrew funding from the collection, after which the RAF Museum did not take on the costs of maintaining the aircraft. Several of the jet airliners have subsequently been broken up, including the only Boeing 707 that was preserved in the UK, a Vickers VC10 and a Hawker Siddeley Trident.

The National Cold War Exhibition opened at Cosford in February 2007. The exhibition houses the museum's V bombers and other Cold War aircraft in a newly constructed 8,000m2 exhibition building designed by architects Fielden Clegg Bradley.[3] The exhibition concept and design was developed by Neal Potter and includes 'silo theatres' which depict, in a variety of media, the key tensions of the Cold War period.

The first Director of the Museum was Dr John Tanner who retired in 1987. In 1988 Dr Michael A Fopp (who had previously directed the London Transport Museum) was appointed and is currently Director General of all three sites covered by the Museum.

The site can be reached by public transport via the neighbouring Cosford railway station on the Wolverhampton to Shrewsbury Line. 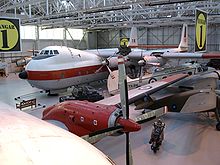 The Armstrong Whitworth Argosy C1 on display in Hangar 1 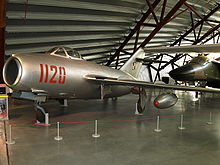 The BAC TSR-2 on display in the Test Flight hangar 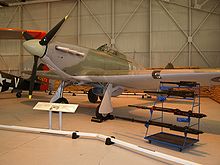 A Hawker Hurricane II on display in the War Planes hangar, a selection of armament used by the type is also displayed 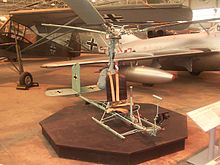 The Cosford museum houses a large collection of aero engines, the majority are located in Hangar 1, a small side room of this hangar contains a display of rocket engines.

The museum holds a large collection of missiles and rocket-powered weapons, including several rare German World War II types, the majority are located in the National Cold War Exhibition with the German collection on display in Hangar 1. 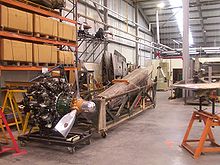 A Sopwith Dolphin under restoration in 2003 with the Miles Mohawk behind.

Also on the museum site is the Michael Beetham Conservation Centre. The centre restores aircraft and artifacts for display at both Cosford and London. Named in honour of Marshal of the Royal Air Force Sir Michael James Beetham and was opened by him on the 13 May 2002.[4]

Current in storage or long-term restoration include: