St. Anne's Episcopal Church is a historic Episcopal church located in Church Circle, Annapolis. The first church in Annapolis, it was founded in 1692 to serve as the parish church for the newly created Middle Neck Parish, one of the original 30 Anglican parishes in the Province of Maryland.[1] 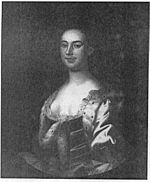 Elizabeth Calvert, who married Benedict Swingate Calvert in St Anne's Church in 1748. Painting by John Wollaston. Collection of the Baltimore Museum of Art.

St. Anne's was founded in 1692 after the passing of the Establishment Act. The Act allowed for the construction of the State House, King William's School, and St. Anne's, though due to the limited work force and insufficient funds, all of the projects were finished much later than expected.

Work on St. Anne's started out slowly. In 1699 the General Assembly specified that the dimensions of the church were to be 65 ft wide (20 m) and 30 ft long (9.1 m) with a porch and a tower that would hang a bell. But due to the insufficient funds, no progress was made until 1700, when the government invested enough money to being construction. By 1704, the church was finished, though some changes were made in the structure. It served Chapel River until 1715, when the Province of Maryland was returned to Lord Baltimore. A bell was donated to St. Anne's by Queen Anne, which would call parishioners to mass until it was destroyed by fire in 1858.

Since St. Anne's was often referred to by writers of the time as a "barn" rather than a "proper place of worship", many locals asked the government for a new church in 1775. Their wish was granted, and in late 1775, the church was razed.

After the original church was razed, the local government made plans to build a new church which was to be designed by Joseph Horatio Anderson, who was the architect of the State House. Unfortunately, construction had to be cancelled since it was planned at the beginning of the Revolutionary War. The bricks and timber that were to be used to build to new church were sent to the Severn River to build a fort, and most of the work force went off to fight. During the War, St. Anne's parishioners worshiped at St. William's School, but as that began to become inadequate, a building was built on West Street as a temporary place for worship.

After the War officially ended with the Treaty of Paris in 1783, the new found United States went into economic depression due to severe war debts and dislocation of accustomed trading patterns. This cause a further delay on the new church building's construction. Finally, in 1792, the new St. Anne's church was finished. It was much larger and more structurally secure than it predecessor. It was consecrated in 1792 by Bishop of Maryland Thomas John Claggett, the first Bishop of Maryland and an curate in the old church.

On February 14, 1858, a furnace fire practically destroyed the interior of the building. Most of the original documents from the old church burned, and a new church building was requested.

The third and final church was built in 1858. It was designed in a Romanesque Revival style and incorporated a portion of the old tower. Most of the church was built in that year apart from the steeple which was finished in 1866 due to the Civil War. This is St. Anne's current church building.