The Daimler-Benz DB 603 engine was a German aircraft engine used during World War 2. It was a liquid-cooled in-line 12 cylinder inverted V12 enlargement of the DB 601, which was in itself a development of the DB 600. Production of the DB 603 commenced in May 1942.[1]

The Mercedes-Benz T80 land speed record car, designed by aircraft engineer Josef Mickl with assistance from Ferdinand Porsche and top German Grand Prix racing driver Hans Stuck, incorporated the third prototype DB 603. It ran on pure alcohol with MW injection and was tuned to 3,000 hp (2,200 kW) — enough, it was believed, to propel the aerodynamic three-axle T80 up to 750 km/h on the Dessau autobahn in January 1940 during Rekord Woche (Record/Speed Week). Due to the outbreak of the war in September 1939, the T80 (nicknamed Schwarz Vogel, "Black Bird") never raced. The DB 603 engine was removed from the vehicle for use in fighter aircraft. 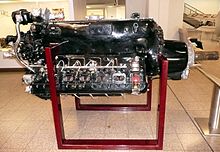 Prototypes and other versions

All power data is given in metric horsepower as stated per manufacturer. Power (max) is Takeoff and Emergency power (5-min-rating), combat power is climb and combat power (30-min rating), continuous is without time limit.