The Azerbaijani Land Forces (Azerbaijani: Azərbaycan Silahlı Qüvvələri Quru Qoşunları) are the land force component of the Azerbaijani Armed Forces.[3][4] Since the fall of the Soviet Union, Azerbaijan has been trying to further develop its armed forces into a professional, well trained, and mobile military. Based on 2007 statistics the country has about 56,840 ground force troops, with additional paramilitary forces of 15,000. In addition, there are 300,000 former service personnel who have had military service in the last fifteen years.[5]

Reportedly, in wartime, the Army proper could call upon the support of the National Guard, the Internal Troops of Azerbaijan, and the State Border Service. The exact wartime command structure remains unclear.

During the Soviet period, Azerbaijan was part of the Transcaucasus Military District, whose forces in the republic were commanded by the 4th Army. The 4th Army consisted of three motor rifle divisions (the 23rd Motor Rifle Division (MRD) at Ganja, the 60th at Lankaran, and the 295th in Baku) and army troops that included missile and air defense brigades and artillery and rocket regiments. Azerbaijan also hosted the 49th Arsenal of the Main Agency of Missiles and Artillery of the Ministry of Defense of the Russian Federation, which contained over 7,000 train-car loads of ammunition to the excess of one billion units. In addition, the 75th Motor Rifle Division, part of the 7th Guards Army, was in Nakhichevan Autonomous Republic.

In summer 1992, the Defense Ministry of Azerbaijan, following a resolution by the Azerbaijani president on the privatization of units and formations in Azerbaijani territory, forwarded an ultimatum demanding control over vehicles and armaments of the 135th and 139th motorized rifle regiments of the 295th Motor Rifle Division.[6] The transfer of the property of the 4th Army (except for over half the equipment of the 366th Guards Motor Rifle Regiment of the 23rd Division captured by Armenian armed formations in 1992 during the regiment's withdrawal from Stepanakert) and the 49th Arsenal was completed in 1992. Thus, by the end of 1992, the Azerbaijani Government received arms and military hardware sufficient for approximately three motorized rifle divisions with prescribed army units. The stores and equipment of the 75th Division were handed over to the Nakhichevan government.[7] The former Division HQs may have contributed to the formation of corps headquarters.

Azerbaijan has also implemented a new organizational style in order to modernize its army. Over the last 15 years, Azerbaijan has been preparing its military for possible action against Armenian forces in Nagorno-Karabakh. However Azerbaijan has continually stated that it is interested in a diplomatic and peaceful solution.

Azerbaijan has contracted with Turkey for troop training to strengthen its armed forces. This is necessary in view of deficiencies that Jane's World Armies said in 2004 included huge problems in training, equipping and motivating its soldiers; corruption in its ranks; and a highly politicised officer corps.[8] The Soviet Army tradition of dedovshchina, institutionalised hazing, appears to be continuing in the armed forces as of 2008.[9] The quality and readiness of much of the army's equipment, Jane's said, is also a problem, as a decade of poor maintenance and chronic shortages of spare parts means that many systems are not operational, or cannibalised for parts. Azerbaijan has the second highest military expenditure in CIS. Azerbaijan's defense spending is second only to Russia's within the Commonwealth of Independent States. [10] 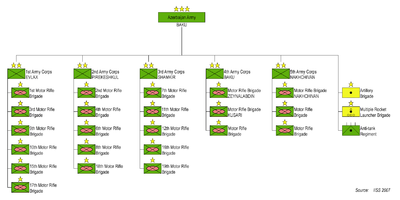 In 2002-4 the IISS Military Balance reported personnel strength falling while total manoeuvre formations increased by one. The Military Balance 2003-4 reported an army strength of 56,000, with four corps headquarters and twenty-three motor rifle brigades, compared to the previous year’s edition showing 62,000 personnel and twenty-two brigades. Artillery and anti-tank units include two brigades and a regiment. 1st Army Corps is headquartered at Yevlakh (Евлах) reportedly with six brigades in 1999. (Brinkster.net gave the corps 1, 3, 9, 10, 15, 17th Motor Rifle Brigades in 1999. The 2nd Army Corps at Pirəkəşkül had seven brigades attached in 1999 (Brinkster.net naming these brigades as the 2, 4, 6, 8, 13, 14, and 18th Motor Rifle Brigades), while 3rd Army Corps, also with six brigades attached, was headquartered at Shamkir/Shamkira (Шамкира). Brinkster.net named these formations as the 7, 11, 12, 16, 19, 20 Motor Rifle Brigades (1999). 4th Army Corps was in the isolated Nakhichevan enclave. It is a former motor rifle division with three motor rifle regiments (1999).

The IISS estimated in 2007 that the Azeri regular army was 56,840 strong, probably basing this figure on Conventional Forces in Europe treaty data. It attributes to the army five corps headquarters, 23 motor rifle brigades, one artillery brigade, one multiple rocket launcher brigade, and one anti-tank regiment.[5] Of the five army corps, the 1st, 2nd, and 3rd Army Corps are concentrated against NK; part of 2nd Army Corps is deployed on the Azerbaijan-Iranian border; the 4th (Bakinskiy) Army Corps covers the capital and the coast and the 5th Army Corps is deployed in Nakhichevan.[11] 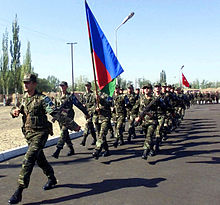 In the past 10–12 years Azerbaijan has purchased significant quantities of weapons and military equipment, specifically tanks, artillery systems and combat aircraft. The amount of arms purchased by Azerbaijan have reached such a point that Azerbaijan now has almost twice as many tanks, armored vehicles, artillery systems and other equipment as allowed it under the limits set by the updated 1999 Treaty on Conventional Armed Forces in Europe (CFE). Elbit Systems, one of the world's largest defense electronics manufacturers and integrators, will upgrade the Azerbaijani Army's T-72 tanks.[13][14][15]

Adding the 2007 IISS figure to the 62 tanks reported to be delivered by Russia gives a total of 282. However this addition makes no provision for inaccuracies in the IISS estimate nor any unreported changes in the number of tanks actually to be delivered by Russia. Another contract as of 2010 states Azerbaijan's army is planning to buy a number of T-84 tanks from the Ukraine and are still negotiations for a contract.

In 2007 the IISS said the Azerbaijani army had 595 armoured combat vehicles including:[5] An additional 29 BTR-70's were acquired from Ukraine in 2009,[17] bringing the total number of armoured combat vehicles to 624 in 2009. There are also reports, not confirmed by the IISS, that the Matador (Mine Protected Vehicle) and the Marauder (Mine Protected Vehicle) are in service.