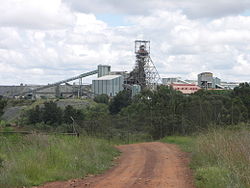 Mining in South Africa has been the main driving force behind the history and development of Africa's most advanced and richest economy. Large scale and profitable mining started with the discovery of a diamond on the banks of the Orange River in 1867 by Erasmus Jacobs and the subsequent discovery and exploitation of the Kimberley pipes a few years later. Gold rushes to Pilgrim's Rest and Barberton were precursors to the biggest discovery of all, the Main Reef/Main Reef Leader on Gerhardus Oosthuizen's farm Langlaagte, Portion C, in 1886, the Witwatersrand Gold Rush and the subsequent rapid development of the gold field there, the biggest of them all.

Diamond and gold production may now be well down from their peaks, though South Africa is still no. 2 in gold[1] but South Africa remains a cornucopia of mineral riches. It is the world's largest producer[2] of chrome, manganese, platinum, vanadium and vermiculite. It is the second largest producer[3] of ilmenite, palladium, rutile and zirconium. It is also the world's third largest coal exporter.[4]

Diamond and gold discoveries played an important part in the growth of the early South African Republic. A site northeast of Cape Town was discovered to have rich deposits of diamonds, and thousands rushed to the area of Kimberley in an attempt to profit from the discovery. The British later annexed the region of Griqualand West, an area which included the diamond fields. In 1868, the republic attempted to annex areas near newly discovered diamond fields, drawing protests from the nearby British colonial government. These annexations later led to the First Boer War of 1880-1881.[5]

Gold was discovered in the area known as Witwatersrand, triggering what would become the Witwatersrand Gold Rush of 1886. Like the diamond discoveries before, the gold rush caused thousands of foreign expatriates to flock to the region. This heightened political tensions in the area, ultimately contributing to the Second Boer War in 1899. Ownership of the diamond and gold mines became concentrated in the hands of a few entrepreneurs, largely of European origin, known as the Randlords.

The gold mining industry continued to grow throughout much of the early 20th century, significantly contributing to the tripling of the economic value of what was then known as the Union of South Africa. In particular, revenue from gold exports provided sufficient capital to purchase much-needed machinery and petroleum products to support an expanding manufacturing base[6].

South Africa is the world's third largest coal exporter, and much of the countries' coal is used for power production. (about ~40%)[9]

Ever since the Kimberley diamond strike of 1868, South Africa has been a world leader in diamond production. The primary South African sources of diamonds, including seven large diamond mines around the country, are controlled by the De Beers Consolidated Mines Company. In 2003, De Beers operations accounted for 94% of the nation's total diamond output of 11,900,000 carats (2.4 t). This figure includes both gem stones and industrial diamonds.[14] Diamond production rose in 2005 to over 15,800,000 carats (3.2 t). [11]

Chromium is another leading product of South Africa's mining industry. The metal, used in stainless steel and for a variety of industrial applications, is mined at 10 sites around the country. South Africa's production of chromium accounted for 39% of the world's total production in 2005, and consisted of 7,490,000 metric tons (7,370,000 long tons; 8,260,000 short tons) of material.[11]

Conditions on most South African mines are very similar to those elsewhere except for the gold mines where the low geothermal gradient, i.e. the rate at which the temperature goes up with depth, is often as low as 9 °C per kilometre depth (compared with a world average of about 25 °C/km[15]), and this, combined with narrow and very continuous orebodies in hard and competent rocks makes it possible to mine to depths unattainable elsewhere in the world.

Silica dust is an ever-present potential hazard so that all drilling dust and loose rock has to be wetted down at all times to prevent silicosis, a lethal disease that attacks the lungs. Unfortunately the narrowness of the inclined reefs/orebodies prevents mechanisation except in a very few cases and most work is very labour intensive. Ventilation requirements to keep working conditions tolerable are huge and a survey of the South African gold mines indicated that the average quantity of ventilating air circulated was some 6 cubic metres per second (210 cu ft/s) per 1000 ton[vague] of rock mined per month[16].

Another serious problem is that of heat. In the deeper mines refrigeration of the intake air is often necessary to keep conditions tolerable and this is now becoming necessary on some platinum mines which, although shallower, have a lower geothermal gradient[17]. Refrigeration is very energy hungry and it is currently a moot point whether ESKOM, the state power company, can supply the necessary power after its recent problems, which will cut power supplies to 90% of previous levels until at least 2012, when a new powerstation is ready[18][19].

The South African mining industry is frequently criticized for its poor safety record and high number of fatalities but conditions are improving. Total fatalities were 533 in 1995 and had fallen to 199 in 2006[20]. The overall fatality rate in 2006 was 0.43 per 1,000 per annum but this hides some important differences. The gold mining rate was 0.71, platinum mining was 0.24 and other mining was 0.35. (For comparison, the rate in the Sixties was around 1.5—see any Chamber of Mines Annual of the period). The reason for the difference is quite clear; the gold mines are much deeper and conditions are both more difficult and dangerous than on the shallower platinum mines.

Falls of ground dominated the causes at 72, machinery, transportation and mining accidents caused 70 and the remainder were classed as general[21]. Of the falls of ground, approximately two thirds were on the deep gold mines, a reflection of the extreme pressure at depth and continual movement of to country rock. Amongst the machinery, mining and transportation fatalities were working on grizzlies[clarification needed] without safety belts, working below loose rock in ore passes, getting crushed by that deadly combination of a loco and a ventilation door frame (the clearance between the two is only a few inches) and working on running conveyors, all direct contraventions of safety instructions. Drilling into misfires was also mentioned, a clear example of sloppy and unsafe mining.

It is difficult to see how falls of ground can be eliminated given their frequent unpredictability, which is increasing with depth, and the difficulties in providing continuous roof support as on longwall coal mines due to the violence of a face blast in the hard rock of the gold mines but clearly much can be done to improve training and to instill a sense of safe working practice in the miners, many of whom are relatively inexperienced.

Mine safety received considerable publicity in 2007, particularly after 3,200 workers were temporarily trapped underground at the Elandskraal mine after a compressed air pipe ruptured due to internal corrosion, broke lose and fell into the man-hoisting shaft. The workers were eventually rescued through the rock hoisting shaft after the blasting smoke had cleared. The incident caused South African President Thabo Mbeki to mandate full safety audits for all operating mines. This audit has caused additional facilities to shut down temporarily, including the nation's largest gold mine located at Driefontein.[22]

In 2007 the South African National Union of Mineworkers, which represents the nation's mineworkers, engaged in a series of talks with the Chamber of Mines, an industry group. The meetings also saw the participation of the Commission for Conciliation, Mediation and Arbitration, a body with mediation authority over the dispute[23]. On November 27, 2007, the National Union of Mineworkers announced that South African mineworkers would go on strike to protest at unsafe working conditions.[24] The strike took place on December 4, and impacted over 240,000 workers at 60 sites across the country, including mines devoted to the production of gold, platinum, and coal.[25][26]