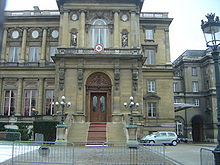 The honour entrance to the Ministry building on the Quai d'Orsay

Ministry of Foreign and European Affairs (French: Ministère des Affaires étrangères et européennes (MAEE)), is France's foreign affairs ministry, with the headquarters located on the Quai d'Orsay in Paris close to the National Assembly of France. The Minister of Foreign and European Affairs (French: Ministre des Affaires étrangères et européennes) in the government of France is the cabinet minister responsible for the foreign relations of France, and took its current title in 2007. "Quai d'Orsay" is often used as a metonym for the ministry. Part of the ministry's central administration is located in Nantes.[citation needed]

The current minister is Alain Juppé.

Secretaries to the King became specialized, writing correspondence to foreign governments, and negotiating peace treaties. The four French secretaries of state where foreign relations were divided by region, in 1589, became centralized with one becoming first secretary responsible for international relations. The Ancien Régime position of Secretary of State for Foreign Affairs became Foreign Minister around 1723,[1] and was renamed Minister of Foreign Affairs in 1791 after the French Revolution. All ministerial positions were abolished in 1794 by the National Convention and re-established with the Directory. For a brief period in the 1980s, the office was retitled Minister for External Relations.