The Ministry of Petroleum (MoP) manages the oil industry, the producer of oil and petrochemical products. MoP is in charge of all issues pertaining to exploration, extraction, exploitation, distribution and exportation of crude oil and oil products. In addition, according to the "Imports and Exports Regulation Act", issuing import licenses for such products is also among the functions of the Ministry of Petroleum.[1] According to BP, Iran's has 137.6 billion barrels (2.188×1010 m3) of proven oil reserves and 29.61 trillion cubic meters of proven gas reserves. Iran ranks third in the world in oil reserves and second in gas reserves.[2]

According to the Fourth Economic, Social and Cultural Development Plan, the Government has been required to transfer at least 10% of the activities related to the exploration, extraction and production of crude oil to the private sector, while in the meantime retaining its ownership of oil resources. This is also the case in other fields of the Ministry of Petroleum's activities.[1]

The Iranian constitution prohibits the granting of petroleum rights on a concessionary basis or direct equity stake. However, the 1987 Petroleum Law permits the establishment of contracts between the Ministry of Petroleum, state companies and "local and foreign national persons and legal entities." Buyback contracts, for instance, are arrangements in which the contractor funds all investments, receives remuneration from the National Iranian Oil Company (NIOC) in the form of an allocated production share, then transfers operation of the field to NIOC after a set number of years, at which time the contract is completed.

Since the 1979 revolution in Iran, the country has been under constant US unilateral sanctions. The first U.S. sanctions against Iran were formalized in November 1979, and during the hostage crisis, many sanctions were leveled against the Iranian government. By 1987 the import of Iranian goods into the United States had been banned. In 1995, President of the United States Bill Clinton issued Executive Order 12957,[5] banning U.S. investment in Iran's energy sector, followed a few weeks later by Executive Order 12959 [5] eliminating all trade and investment and virtually all interaction between the United States and Iran.

NIOC is in charge of oil and gas exploration and production, refining and oil transportation.

National Iranian Tanker Company (NITC), a subsidiary of NIOC, controls the second largest fleet of tankers in OPEC.[6] Iranian Offshore Engineering and Construction Company (IOEC) is also an important subsidiary of NIOC. It is a joint-venture between NIOC and IDRO.

There are eight refineries with a potential capacity of 950,000 barrels per day (151,000 m3/d) and one refinery complex in the country with a total refining capacity of over 15 kbbl/d (2,400 m3/d) (in Tehran, Tabriz, Isfahan, Abadan, Kermanshah, Shiraz, Bandar Abbas, Arak and Lavan Island) and a storage capacity of 8 milliard litre. Abundance of basic material, like natural gas, in the country provide favorable conditions for development and expansion of petrochemical plants. 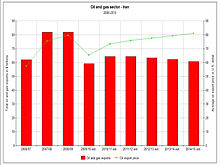 Iran's oil and gas projected revenues chart by the International Monetary Fund. Officials in Iran estimate that Iran's annual oil and gas revenues could reach $250 billion by 2015 once the current projects come on stream.[4] 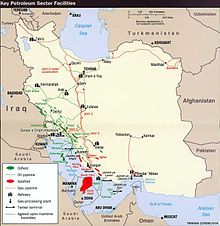 Iran holds 10% of the world's proven oil reserves and 15% of its gas. It is OPEC's second largest exporter and the world's fourth oil producer. 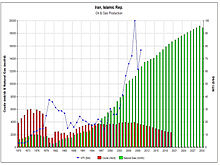