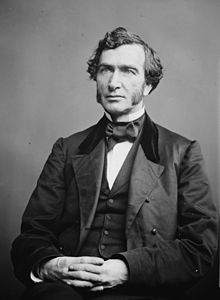 For 20 years prior to the first introduction of the bill in 1857, there was a political movement calling for the creation of agriculture colleges. The movement was led by Professor Jonathan Baldwin Turner of Illinois College. On February 8, 1853, the Illinois Legislature adopted a resolution, drafted by Turner, calling for the Illinois congressional delegation to work to enact a land-grant bill to fund a system of industrial colleges, one in each state. Senator Lyman Trumbull of Illinois believed it was advisable that the bill should be introduced by an eastern congressman,[1] and two months later Representative Justin Smith Morrill of Vermont introduced his bill.

Unlike the Turner Plan, which provided an equal grant to each state, the Morrill bill allocated land based on the number of senators and representatives each state had in Congress. This was more advantageous to the more populous eastern states.[2]

The Morrill Act was first proposed in 1857, and was passed by Congress in 1859, but it was vetoed by President James Buchanan. In 1861, Morrill resubmitted the act with the amendment that the proposed institutions would teach military tactics[3] as well as engineering and agriculture. Aided by the secession of many states that did not support the plans, this reconfigured Morrill Act was signed into law by President Abraham Lincoln on July 2, 1862.

The purpose of the land-grant colleges was:

without excluding other scientific and classical studies and including military tactic, to teach such branches of learning as are related to agriculture and the mechanic arts, in such manner as the legislatures of the States may respectively prescribe, in order to promote the liberal and practical education of the industrial classes in the several pursuits and professions in life.[4]

Under the act, each eligible state received a total of 30,000 acres (120 km2) of federal land, either within or contiguous to its boundaries, for each member of congress the state had as of the census of 1860. This land, or the proceeds from its sale, was to be used toward establishing and funding the educational institutions described above. Under provision six of the Act, "No State while in a condition of rebellion or insurrection against the government of the United States shall be entitled to the benefit of this act," in reference to the recent secession of several Southern states and the currently raging American Civil War. 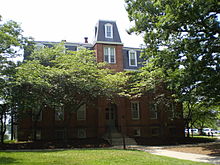 Morrill Hall, on the campus of the University of Maryland, College Park (a land-grant university), is named for Senator Morrill, in honor of the act he sponsored.

After the war, however, the 1862 Act was extended to the former Confederate states; it was eventually extended to every state and territory, including those created after 1862. If the federal land within a state was insufficient to meet that state's land grant, the state was issued "scrip" which authorized the state to select federal lands in other states to fund its institution.[5] For example, New York carefully selected valuable timber land in Wisconsin to fund Cornell University.[6] The resulting management of this scrip by the university yielded one third of the total grant revenues generated by all the states, even though New York received only one-tenth of the 1862 land grant.[7] Overall, the 1862 Morrill Act allocated 17,400,000 acres (70,000 km2) of land, which when sold yielded a collective endowment of $7.55 million.[8] The state of Iowa was the first to accept the terms of the Morrill Act which provided the funding boost needed for the fledgling Ames College (now Iowa State University.)

With a few exceptions (including Cornell University and the Massachusetts Institute of Technology), nearly all of the Land-Grant Colleges are public. (Cornell University, while private, administers several state-supported contract colleges that fulfill its public land-grant mission to the state of New York.)

A second Morrill Act in 1890 was also aimed at the former Confederate states. This act required each state to show that race was not an admissions criterion, or else to designate a separate land-grant institution for persons of color.[9] Among the seventy colleges and universities which eventually evolved from the Morrill Acts are several of today's historically Black colleges and universities. Though the 1890 Act granted cash instead of land, it granted colleges under that act the same legal standing as the 1862 Act colleges; hence the term "land-grant college" properly applies to both groups.

Later on, other colleges such as the University of the District of Columbia and the "1994 land-grant colleges" for Native Americans were also awarded cash by Congress in lieu of land to achieve "land-grant" status.

Congress later recognized the need to disseminate the knowledge gained at the land-grant colleges to farmers and homemakers. The Smith-Lever Act of 1914 started federal funding of cooperative extension, with the land-grant universities' agents being sent to virtually every county of every state. Starting in 1887, Congress also funded agricultural experiment stations and various categories of agricultural and veterinary research "under direction of" the land-grant universities.[10] In some states, the annual federal appropriations to the land-grant college under these laws exceed the current income from the original land grants. In the fiscal year 2006 USDA Budget, $1.033 billion went to research and cooperative extension activities nationwide.[11] For this purpose, former president Bush proposed a $1.035 billion appropriation for fiscal year 2008.[12]