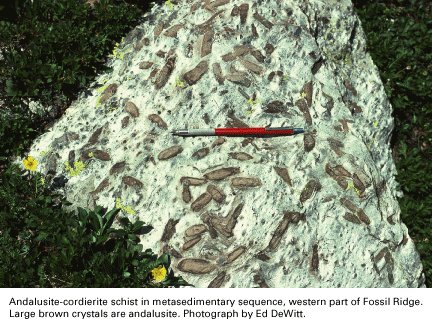 The variety commonly contains dark inclusions of carbon or clay which form an "X" or a cross in section.

A clear variety first found in , can be cut into an interesting gemstone. [ [http://www.gemstone.org/gem-by-gem/english/andalusite.html "International Colored Gem Association: Anadalusite"] ] Faceted andalusite stones give a play of red, green, and yellow colors that resembles a muted form of , although the colors are actually the result of unusually strong .

Andalusite is a common regional metamorphic mineral which forms under low pressure and moderate to high temperatures. Called Lapis Crucifer in ancient texts. The minerals and are polymorphs of andalusite, each occurring under different temperature-pressure regimes and are therefore rarely found together in the same rock. Because of this the three minerals are a useful tool to help identify the pressure-temperature paths of the host rock in which they are found.