Cracker (food)
This article is about the oven-baked food item. For the unrelated disparaging term, see Cracker (pejorative) 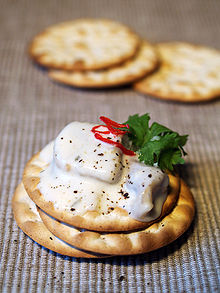 Water biscuit crackers plain and as part of a snack in Singapore, with herring and garlic cream topping and a parsley garnish 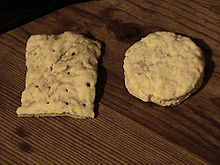 Reproduction of 19th century hardtack, in the Army (square) and Navy (round) styles

Beaten biscuits are another relative of crackers

A cracker is a baked good commonly made from grain flour dough and typically made in quantity in various hand-sized or smaller shapes. Flavorings or seasonings, such as salt, herbs, seeds, and/or cheese, may be added to the dough or sprinkled on top before baking. Crackers are a nutritious and ready to eat way to use a staple food or cereal grain that is advantageous for storage and travel. A precedent for the modern cracker can be found in nautical ship biscuits, military hardtack, and sacramental bread. Ancestors of the cracker can be found in ancient flatbreads, such as lavash, pita, matzo, flatbrød, and crisp bread. Asian analogues include chapati and senbei.

Crackers are said to have been invented in 1792 when John Pearson of Newburyport, Massachusetts, USA made a pilot-like bread product from just flour and water that he called Pearson's Pilot Bread. An immediate success with sailors because of its shelf life, it also became known as hardtack or sea biscuit. This was the first cracker bakery in the United States, and produced crackers for more than a century.[1] Crown Pilot Crackers from the same recipe were made and sold in New England up until early 2008, and used in traditional clam chowder recipes.

But the real revolutionary moment in the life of the cracker came in 1801 when another Massachusetts baker, Josiah Bent, burned a batch of biscuits in his brick oven. The crackling noise that emanated from the singed biscuits inspired the name - crackers - and a bit of ingenuity, as Bent set out to convince the world of the product's snack food potential. By 1810, his Boston-area business was booming, and, in later years, Bent sold his enterprise to the National Biscuit Company, which now does business under the Nabisco name.

The holes in crackers are called "docking" holes. The holes are placed in the dough to stop overly large air pockets from forming in the cracker while baking. Crackers come in many shapes and sizes - round, square, triangular, etc.

In U.S. English, the name "cracker" is most often applied to flat biscuits with a savory, salty flavor, in distinction from a "cookie", which may be similar to a "cracker" in appearance and texture, but has a sweet flavor. Crackers may be further distinguished from cookies by the manner in which they are made. Crackers are made merely by layering dough and cookies may be made in many of the same manners a cake would be prepared. Crackers sometimes have cheese or spices as ingredients, or even chicken stock. Crackers are typically salted flour products.

Saltine and oyster crackers are often used in or served with soup.

Mock apple pie is made from Ritz (or similar) crackers.

Graham crackers and digestive biscuits are also eaten as cookies, although they were both invented for their supposed health benefits.

A popular snack is salted crackers with cheese and butter as a topping.[citation needed][dubious – discuss]