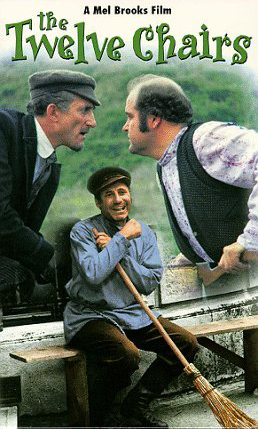 "The Twelve Chairs" is a directed by , starring , and . The screenplay was written by Brooks. The film is loosely based on a novel, "" (Двенадцать Стульев) (1928) written by .

In the in , Ippolit Matveevich Vorobyaninov (), an impoverished aristocrat from , is summoned, along with the village priest, to the deathbed of his . She reveals, before passing, that a fortune in jewels had been hidden from the s by being sewn into the seat cushion of one of the twelve chairs from the family's dining room set. After hearing the dying woman's , the (), who has arrived to give the , decides to leave the Church and attempt to steal the treasure.

Shortly thereafter, a homeless con-artist, , meets the dispossessed nobleman and manipulates his way into a partnership in his search for the family riches. Although Ostap is an unwelcome addition at first, it is mostly through his cunning, intellect and charm that the pair manages to get anywhere while keeping ahead of the priest who is now their competition.

The chairs, along with all other private property, had been expropriated by the State after the Russian Revolution. The two set off together to locate the chairs and recover the fortune, but are stymied by a series of false leads and other trying events.

Early on, they find that the chairs have been split up and sold individually. Therefore, their hunt requires a great deal of travel to track down and open up each piece of the set in order to eliminate it as a possible location of the booty. As they progress, they meet comrades from every walk of life in Soviet Russian society, transforming the film into a satirical sendup of failing . Much of the humor in the movie is the result of the two getting into, and then extricating themselves from, outrageous situations in their mission to covertly locate, open up (read: utterly destroy), and thus rule out each chair, in turn.

Eventually, but only after perpetrating plenty of cons to pay for the lengthy enterprise, the duo discovers the last, 12th chair, that must - through process of elimination - contain the treasure. It is located in a , tantalizingly accessible, but also, frustratingly inconvenient due to the presence of so many witnesses. The two hide in the building until after closing so they can open up the last chair in peace, after everyone has gone.

At the moment of discovery, Bender carefully and quietly opens the chair cushion with his knife, but their hopes are dashed as it is found to be, like all eleven before them, completely empty. Vorobyanninov is stunned and angry, while Bender cannot help but laugh at the absurdity of the situation.

A watchman then comes upon the protagonists, and Vorobyanninov asked what happened to the jewels. "Look around you," the watchman answers, explaining to the pair how the jewels had been unexpectedly found one day, and further, how it was decided that the grand building that they were now sitting in the center of, would be built with the fortuitous fortune realized by the sale of the discovered gems.

Hearing this "inspiring" story sends Vorobyaninov over the edge. Driven into a sudden rage, he smashes the chair to pieces and assaults the officer whom the watchman has summoned, knocking him out. After sternly admonishing him for hitting a policeman, Bender leads the way as the two make a hurried escape into the night.

Now at the end of his patience, feeling demoralized, and bankrupted in every sense of the word, Bender proposes that he and Vorobyaninov split up and go their separate ways. This produces an immediate and palpable tension because the two had been so long together. Even though they could not have had more different backgrounds, and even as they regularly antagonized one another, they also had bonded to one another, each in his own fashion. However, Bender is unable to see how a con man could possibly survive long with an emotionally shattered nobleman and so after forcefully saying his piece, he begins to walk off.

Capriciously, in a last ditch effort to keep Bender from leaving, Vorobyaninov flings the remains of the last chair into the air, and collapses to the ground feigning an epileptic seizure as an unspoken invitation for Bender, the inveterate swindler, to rip off the crowd, a reprise of an earlier event in the story. This is a pivotal because previously, as they were trying to decide what to do, the former noble had impetuously and derisively proclaimed to Bender that "a Vorobyaninov never begs!"

Bender, who had not yet noticed the action of his comrade, as he was about to place a serious distance between himeself and his nettlesome comrade, is compelled to pause as he hears the people around suddenly gasp and huddle around a "stricken" man who has tumbled to the ground among them. Turning to see the cause of the commotion, and after what feels like a long pause even though it is only a moment, Bender stands, watching the spastic flailing of his longtime partner/nemesis, and he silently considers the scene before him as the crowd murmurs and mulls about, seemingly unsure what to do.

Finally, with a wan grin that only someone who knew the irony would see, he loudly calls out for the attention of those around, asking for all the passers-by to gather around. Bender lapses with ease into a spontaneous but smooth appeal to all to give generously to this sad man who had been stricken down with, "the same malady that struck down our own beloved Dostoevsky." He works the crowd by silent agreement and with professional skill.

The camera begins to pull back and shows more people being pulled in by the ruse. As the shot continues to pull out and as the music wells up in the background, the movie ends as the two, using impromptu gestures, and without a word between them, cement their partnership and avert their parting - at least for the day, which, along with every other Soviet citizen, is all they now have.

Frank Langella won the NBR () award for Best Supporting Actor. Mel Brooks was nominated for the WGA () for Best Comedy Adapted from Another Medium.