Myth II: Soulblighter is a 1998 real-time tactics computer game for the PC and Macintosh developed by Bungie. It is a sequel to Myth: The Fallen Lords and the second game in the Myth series. 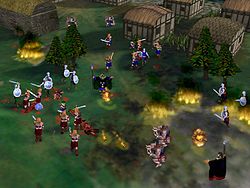 Like the previous installment, Myth II is a real-time tactics where players are given a pre-determined selection of units with their own strengths and weakness, without the option to recruit any further units later in battle, emphasizing the strategy aspect of the gameplay.

In both single and multiplayer games, players can utilize units in different way such as combat formations and special abilities and making use of terrain. While some units from the previous Myth retain their special abilities such as the Dwarf satchel charge and Journeyman healing, other past units like the Bowmen are able to fire a secondary fire arrow that can set the targeted area aflame damaging nearby units and can use a knife as a last resort when in close combat. While some other units for both the Light and Dark sides aren’t present in Soulblighter such as the Forest Giants and Myrmidons, new units are made available such Dwarven Mortars and the Myrkridia, previously only mentioned in The Fallen Lords. The previously Dark Trow giants are also made available for use by the Light, being classed as unaligned.

The single player campaign is only playable from the perspective of the Light, through a series of both linear and non-linear laid out levels, with end of level stats and individual unit kill counts and prevalence still present, along with the option to play them cooperatively in multiplayer through online or local network.

60 years after the Great War and the fall of Balor the Leveler, the remaining armies of The Province led by Alric have managed to restore their lands, with the once fallen city of Madrigal now standing as the capital. The forces of the Dark are only a few scattered remnants, however, the fate of Balor's general - Soulblighter, remains unknown.

The story is then told through a series of Journal entries from a lone soldier who is part of a small contingency led by Commander Crüniac. While passing through the town of Tallow, the company is asked to investigate reports of grave robbing. At first little is thought of the matter until they arrive at Willow Creek. Originally believing to find the city raided by bandits, they discover it is actually swarming with undead. After clearing the town, the soldiers are then sent to rescue live men being held at a cemetery by brigands. After freeing them, one is escorted back to Tallow where he reveals to the mayor that the instances of grave robbing lead back to Keep Kildaer, ruled by the sinister Baron Kildaer. With the help of an invisible dwarven pathfinder named Jari, Crüniac’s forces sneak inside the Baron's castle and kill him and lay torch to the keep, but as they make their escape, a veritable legion of undead march out of the gates in pursuit.

In this pursuit, Crüniac is killed with warrior Garrick hearing his last words that Soulblighter has returned. Garrick retrieves from his body a Journal taken from the Baron’s library, the Journal of a soldier who fought in the Great War sixty years prior (being the same who narrated the plot in The Fallen Lords). The Journal later helps in locating the Total Codex, an ancient tome which spoke of events that had yet to transpire. From the Codex, Alric discerns that Soulblighter is trying to locate "The Summoner", a man who would resurrect the Myrkridia, a race of bloodthirsty monsters. In his search for The Summoner, Soulblighter marches through and destroys major Cath Bruig cities on his way to Madrigal, where Alric has stayed to save any remaining survivors. A man reports back to Alric after having been interrogated by a horrific woman, later confirmed to be Shiver, who was killed in the Great War but was recently resurrected by Soulblighter himself. Before setting sail, Alric and his men narrowly escape the now-resurrected Myrkridia.

Seeking to fight fire with fire, Alric then leads the search to find The Deceiver, who once fought for Balor, but was less devout to his fellow Fallen Lords. He is eventually found and resurrected after being left for dead in a frozen lake for six decades. Allying himself with Alric, The Deceiver and a small reluctant force head to the ruins of Rhi’ornin, the dominion of the Trow giants who also served Balor in the Great War. By winning a game of their choosing, The Deceiver convinces the Trow to join their cause. With their help, Alric's forces recapture the lost city of Muirthemne, the former capital of the Cath Bruig, and brave its haunted catacombs in search of the legendary Ibis Crown. Alric is then crowned as the new Emperor of the Cath Bruig. In reclaiming Muirthemne, the ancient order of the Heron Guard is re-established.

In order to quell the onslaught of Myrkridia, The Deceiver plans to travel to Forest Heart and locate a fragment of the Tain, a mystical artifact that once imprisoned the Myrkridia, and enter it to hunt down and kill The Summoner. After succeeding in his plan, The Deceiver suddenly launches a sneak attack on Soulblighter’s camp, which fails and results in him and his forces being imprisoned. During this time however, the jailor Phelot, a Shade supposedly allied with the Dark, frees one group of men with the rest quickly fighting back against the Dark. Once rescued, The Deceiver overwhelms Soulblighter and kills one of the fiend's crows, robbing much of his power and preventing him from fleeing in that manner again. Following the prison break, The Deceiver hunts down Shiver with a group of five heroes in the desert south of Silvermines. In their confrontation, Shiver is betrayed by her general Phelot, who promptly lays waste to her army while The Deceiver kills Shiver. Unfortunately, her death triggers a devastating backlash that kills The Deceiver at the same time.

Alric and Soulblighter lead their armies into one final confrontation at the foot of the volcano Tharsis. Soulblighter is pushed back into the volcano itself where he plans a last desperate attempt against the Light by shattering the Cloudspine mountain range, an act that would cause widespread devastation over the land. Alric eventually tracks him down and breaks the rock Soulblighter stands on, causing him to plummet to his definitive death in the molten lava, ending forever the Fallen Lords threat over the world.

The journal writer/narrator concludes that man once again rebuilds his land and speaks of the cycle of the Leveler, that he is never dead, but only returns as a different form every millennium. Soulblighter, however, was not the Leveler as he tried to force to cycle at his own peril and as a result might have even broken the cycle. Whether or not this outcome is true is still unknown.

The original game was released on November 30, 1998. In 1999 it was re-released with an expansion entitled Myth II: Chimera as part of Myth: The Total Codex, which also included the first game. It was later also ported to Linux by Loki Software.[2]

A game entitled Green Berets, set in Vietnam War, was released in 2001 by Take-Two Interactive following their acquisition of the Myth franchise after Bungie was acquired by Microsoft. Green Berets was powered by the Myth II engine, and included a full copy of the game.

Upon the game's release, Myth II: Soulblighter received a positive reception,[3][4] with an average score of 88/100 based on 12 reviews at Metacritic.[5]

Myth II continues to have a supportive fanbase. Although Bungie no longer develops the code, they have released the code to a limited set of programmers for continued development. While the game is over a decade old, new releases are still being developed, and hosted at The Tain.