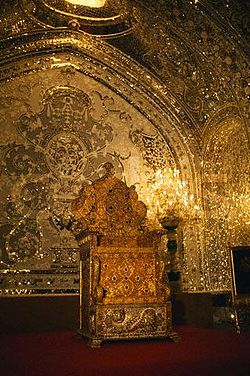 The Naderi Throne of Iran is a gemmed and enameled throne made during Qajar era, now kept in the national treasure of the Central Bank of Iran. The throne has no relation to Nader Shah (1688 - 1698) but the Persian word 'nader' that means "rare" or "unique" in the Persian language.[1] The throne was made by the order of Fat'h Ali Shah Qajar (1772 – 1834) and is seen in many paintings of his era.

The throne can be taken apart into 12 separate sections. It was intended to be portable, to be carried along when the shah moved to his summer residences. It is made of wood, covered with gold, and encrusted with jewels. Among the 26,733 jewels covering the throne, there are four very large spinels on the backrest, the largest of them is 65 ct. There are also four very large emeralds on the backrest, the largest of them weighing approximately 225 ct. The largest ruby on the throne is 35 ct.Its height is approximately 225 cm. It has verses written on it which are attributed to Fathali Shah. Diaries written by travellers who visited Fathali Shah's court at the time also mention a throne such as this one, though the throne may have been refurbished by Naser al-Din Shah Qajar.

The designs which can be seen on the throne include a peacock tail on the backrest, ducks, dragons, leaves and tree branches. A rather tame-looking lion rests on the front panel of the footstool.

The throne was kept in Golestan Palace but it was later transferred to the National Treasure of the Central Bank of Iran. The last time this throne was used was in the coronation ceremony of Shah Mohammad Reza Pahlavi (1967).[2][3]