The National Moot Court Competition was created in 1947 by Harrison Tweed, then president of the New York City Bar Association, as part of a campaign to recruit younger members to the City Bar in the years following World War II.

The first competition was held at the City Bar’s building in January 1950. Twelve law school teams debated the legality of “rainmaking,” or the use by farmers of rainmaking devices to divert water from adjacent land. The program was formatted as a mock appeal, in order to develop the skills of appellate advocacy among law students.[1]

In the years since, the moot court competition has expanded to include competitions in 14 regions throughout the continental United States. The cases argued traditionally focus on a timely issue arising under the United States Constitution, in keeping with the competition’s original theme of appellate advocacy. The final national competition continues to be held in New York, and the final argument between the top two teams is judged by a seven-person mock court, including prominent jurists, the president of the New York City Bar Association and the president of the American College of Trial Lawyers. 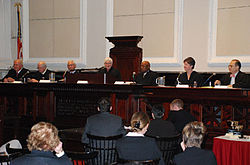 In both the regional and national competitions, all teams are required to argue the same single case on appeal. The case consists of two issues drawn from current legal issues that generally are likely to be considered by the Supreme Court. The cases are devised and prepared each year by the Young Lawyers Committee of the New York City Bar Association.

The National Moot Court Competition begins on the regional level. The United States is divided into fourteen regions, each of which hosts its own regional competition for teams whose law schools fall within their jurisdiction. In March, the New York City Bar Association invites all ABA-accredited law schools to field moot court teams of two to three students to participate in regional competitions. The regional winners and runners-up compete in a four-day national competition, as the 28-team field narrows to sixteen, eight, four, two, and ultimately one champion over the course of the competition.

The best overall team is presented with the Russell J. Coffin Award, which includes a trophy and a cash reward. The team presenting the best oral arguments is awarded the John W. Davis award, which includes an engraved silver cup. Best individual speaker and runner-up for best individual speaker are both awarded crystal obelisks by the American College of Trial Lawyers.

Every participating team is required to submit a brief in advance of the regional and (if they qualify to attend) national competitions. At each competition, teams are required to argue both sides of their appeal. Competitors are judged 40% on written briefs, and 60% on oral presentation. The Competition is administered by, and governed by Rules drafted by, the New York City Bar’s Young Lawyers Committee.