The National Museum of Fine Arts is Malta’s major museum for the visual arts.[1] It houses a collection of works by Maltese and foreign artists mainly representing the major European artistic styles.

The museum is located in the capital city of Valletta, in a palace at the lower end of South Street. The area is the seat of fine historical palaces dating from the times of the Order of St John of Jerusalem that are now used by government ministries and departments. It is also well known for its wine bars and cafes, and views of the city's grid-shaped streets which visitors usually explore on their way to the museum.

The museum is managed by Heritage Malta.

The building, originally one of the oldest in Valletta, was largely rebuilt into a Rococo palace in the 1760s for use by the Knight of Malta Ramon de Sousa y Silva, a wealthy Portuguese knight of the Order of St John who used it as his private home.

During the early 19th century the palace was home for a brief time to Louis Charles of Orleans, Comte de Beaujolais, a relative of the King of France.[2]

In the 1820s the building became Admiralty House and the seat of the Commander-in Chief of the British Mediterranean Fleet. It hosted such high-ranking personalities as Lord Louis Mountbatten of Burma, Winston Churchill, King George V and Queen Elizabeth II amongst other high-profile personalities.

The museum houses the major part of the national collection of Malta. The collection began in 1923 when the first fine arts curator, Vincenzo Bonello, embarked on establishing a collection within what was then called the National Museum. Bonello acquired numerous works of excellent quality on the local art market, and in London and Italy. Most were purchased at a time when prices in the art market where still within reach of the museum's modest budget. Public spirited individuals and organizations also left significant bequests. 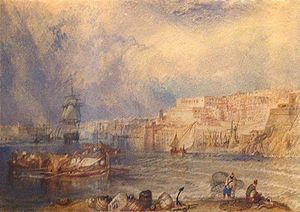 The Turner wartercolour displayed in the museum

The permanent display includes the largest collection of paintings by the Southern Italian Baroque artist Mattia Preti (1613–1699), an Italian Knight of the Order of Malta who also contributed to the transformation of the interior of St. John’s Co-Cathedral, Valletta. This, together with a fine and rare collection of antique maps, represents one of the strengths of the collection.

The collection also includes the works of two outstanding Maltese sculptors, Melchiorre Cafá (1636–1667) and Antonio Sciortino (1879–1947), and a noteworthy group of Maltese landscapes. The Grand Harbour of Malta and its environs is the subject of a Joseph Mallord William Turner watercolour on permanent loan from HSBC Bank Malta (1775–1851). Other works by Edward Lear (1812–1888), Louis Ducros (1748–1810) and local artists representing the same subject are also on display.

The museum exhibits a collection of Maltese furniture and silverware, as well as majolica jars mainly of Sicilian production. Many of the jars were in use at the Sacra Infermaria, the Hospital of the Order of St John.[3] Ecclesiastical silverware is also on display, including a rare fifteenth century chalice of Parisian workmanship.

The museum has a very active calendar of temporary exhibitions mainly by Maltese artists. Museum curated exhibitions have included the following:

The museum is a popular venue for lectures and book presentations held from time to time in its baroque galleries. It also has a educational programme the involves school children with treasure hunts and other hands-on activities.

A very popular event launched in 2009 is Art & Wine @ South street. It features contemporary artists in dialogue with works of art from the museum's permanent display.

Restoration works are currently underway in the museum’s courtyard, called 'Il-Loggia'. Il-Loggia is a popular venue for exhibitions and events.

Other conservation and maintenance works are also being planned.