Route 9 runs through the following towns and cities of Quang Tri Province:

Route Coloniale 9 or RC9 was constructed by the French in the early 20th century.

With the partition of Vietnam following the First Indochina War, Route 9 was the northernmost West-East road in South Vietnam and ran roughly parallel to the Vietnamese Demilitarized Zone. 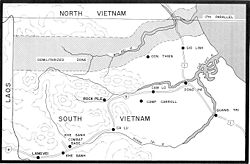 Map of the Demilitarized Zone

In the early 1960s as the Vietnam War began to increase in intensity, the Army of the Republic of Vietnam (ARVN) and US Special Forces began to build a chain of bases south of the DMZ to interdict the flow of men and materiel from North Vietnam. These bases included:

Route 9 became a vital supply artery to these bases and the North Vietnamese Army (NVA) were frequently able to cut or ambush Route 9 during the "Border Battles" period from 1967 to 1969. Route 9 was the access road used in Operation Pegasus and Operation Lam Son 719.