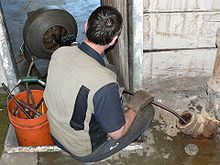 A plumber's snake, sometimes known as a "toilet jack" or "electric eel", is a flexible auger used to remove clogs in plumbing that cannot be loosened with a plunger.

Most devices consist of a coiled metal wire with space between the coils at the end. The other end is attached to a device with a crank that rotates the wire as it moves down into the pipe. Drains are cleared by one of several mechanisms:

If the auger cannot break up or dig itself into the clog, the clogged section of the pipe (which can usually be located by measuring the length of the auger that has gone into the pipe) may have to be replaced by a plumber.