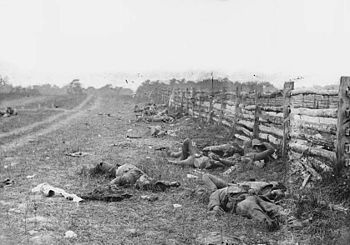 The field at Antietam, American Civil War by Alexander Gardner, 1862.

Although photographs can provide a more direct representation than paintings or drawings, they are sometimes manipulated, creating an image that is not objectively journalistic.

Photography, presented to the public in 1839, was believed to create images that were accurate representations of the world. Photography was used to record historical information, but not always in the optimistic way that was conceived at the advent of the medium.

It was anticipated that photographers, supposedly not acting as active participants of war but as neutral partisan, would be able to bring their cumbersome photographic equipment into the battlefield and record the rapid action of combat. This was not the case, as the technical insufficiency of the photograph in recording movement was not considered. The daguerreotype, an early form of photography that generated a single image using a silver-coated copper plate, took a very long time to produce. This prevented action photography, as images took minutes to develop and could not be processed immediately. 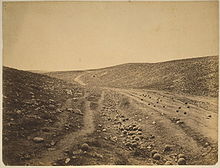 Valley of the Shadow of Death, with road full of cannonballs, by Roger Fenton in the Crimea, 1855.

The first war photographer was an anonymous American who took a number of daguerrotypes during the Mexican–American War, in 1847, of the occupation of Saltillo.[1] The first known war photographer is the Hungarian-Romanian Carol Popp de Szathmàri who took photos of various officers in 1853 and of war scenes near Olteniţa and Silistra in 1854, during the Crimean War. He created some 200 pictures albums, which he personally offered in 1855 to Napoleon III of France and Queen Victoria of the United Kingdom. About 9 of his pictures survive today[2] The French photographer Ernest Edouard de Caranza caught his countrymen in their camp near Varna, in 1854. He was followed by Roger Fenton, in 1855, although with his bulky equipment he was limited to posed still photographs or landscapes. He took a large van and an assistant, and returned to Britain with over 350 usable large format negatives.

In the late 1850s, Felice Beato traveled to India to photograph scenes from the recent mutiny, and produced a number of images of the Siege of Lucknow and the Siege of Delhi. Shortly thereafter, he went to China to record the aftermath of the Second Opium War.

The inability of the early photograph to record a moving object lead to the practice of recreating scenes of battle, such as in the work of both Haley Sims and Alexander Gardner. They admittedly reconfigured scenes that took place during the American Civil War (1861–65) in order to intensify the visual and emotional effects of battle.[3] Alexander Gardner and Mathew Brady rearranged bodies of dead soldiers during the Civil War in order to create a clear picture of the atrocities associated with battle. In Soldiers on the Battlefield, 1862, Brady produced a controversial tableau of the dead within a desolate landscape. This work, along with Alexander Gardner’s 1863 work Home of a Rebel Sharpshooter[4] were images, which, when shown to the public, brought home the horrific reality of war.[5] 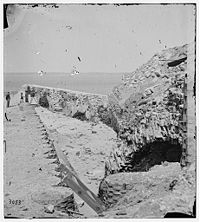 The Second Anglo-Afghan War of 1878–80 was photographed by John Burke who traveled with the Anglo-British forces. This was a commercial venture with the hope of selling albums of war photographs.

Since early photographers were not able to create images of moving targets, they would record more sedentary aspects of war, such as fortifications, soldiers, and land before and after battle along with the re-creation of action scenes. Similar to battle photography, portrait images of soldiers were also often staged. In order to produce a photograph, the subject had to be perfectly still for a matter of minutes, so they were posed to be comfortable and minimize movement. 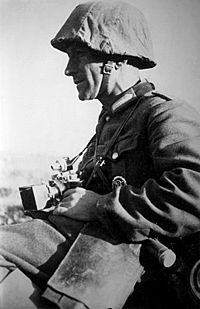 A Wehrmacht combat photographer on the Eastern Front, 1941. 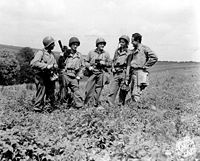 War photographers during the Battle of Normandy.

A classic war photograph of the fire of anti-aircraft guns deployed near St. Isaac's cathedral during the defense of Leningrad in 1941.

In the 20th century, photographers covered all the major conflicts, and many were killed as a consequence. One of the most famous was Robert Capa who covered the Spanish Civil War, the D-Day landings and the fall of Paris, and conflicts in the 1950s until his death by a landmine in Indochina in May 1954. The famous photograph of the flag-raising on Mount Suribachi on Iwo Jima in 1945 was taken by photojournalist, Joe Rosenthal. Photojournalists continue to cover conflicts around the world.

Unlike paintings, which presented a single illustration of a specific event, photography offered the opportunity for an extensive amount of images to enter circulation. The proliferation of the photographic images allowed the public to be well informed in the discourses of war. The advent of mass-reproduced images of war were not only used to inform the public but they served as imprints of the time and as historical recordings.[6] Mass-produced images did have consequences. Besides informing the public, the glut of images in distribution over-saturated the market, allowing viewers to develop the ability to disregard the immediate value and historical importance of certain photographs.[3]

Photographers who participate in this genre may find themselves placed in harm's way, and are sometimes killed trying to get their pictures out of the war arena. Journalists and photographers are protected by international conventions of armed warfare, but history shows that they are often considered targets by warring groups — sometimes to show hatred of their opponents and other times to prevent the facts shown in the photographs from being known. War photography has become more dangerous with the terrorist style of armed conflict as some terrorists target journalists and photographers.[citation needed] In the current Iraq War, several photographers have been captured and executed by terrorists or shot in the knee cap by armed insurgents.[citation needed] Several have also been killed by US fire; two Iraqi journalists working for Reuters were notably strafed by a helicopter during the July 12, 2007 Baghdad airstrike, yielding a scandal when Wikileaks published the video of the gun camera.

War photographers need not necessarily work near active fighting; instead they may document the aftermath of conflict. The German photographer Frauke Eigen created a photographic exhibition about war crimes in Kosovo which focussed on the clothing and belongings of the victims of ethnic cleansing, rather than on their corpses.[7] Eigen's photographs were taken during the exhumation of mass graves, and were later used as evidence by the War Crimes Tribunal in The Hague.[8]