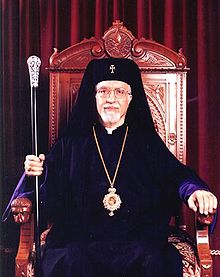 Nerses Bedros XIX (Armenian: Ներսէս Պետրոս ԺԹ. Թարմունի) (b. 17 January 1940, Cairo, Egypt) is the current patriarch of the Armenian Catholic Church. He was the second son and the fifth of eight children born to Elias Taza and Josephine Azouz. He completed his primary and secondary studies at the College of the Brothers of the Christian Schools (Frères des Ecoles Chrétiennes) in Cairo.[1]

He felt the vocation to priesthood very early in life and thus was sent to the Armenian Leonine Pontifical College in Rome in 1958 where he studied Philosophy and Theology at the Pontifical Gregorian University. His Bishop, Msgr. Raphaël Bayan ordained him as a priest in Cairo on 15 August 1965.[2] In Heliopolis he was known as Father Pierre Taza.

He served the parish of the Armenian Catholic Cathedral of the Annunciation in Cairo from 1965 to 1968 with the Rev John Kasparian who, in 1982, became Catholicos Patriarch under the name of Hovhannes Bedros XVIII (John Peter XVIII Kasparian). From 1968 to 1990, Father Pierre Taza was curate of the parish of St Therese of Heliopolis in Cairo.[1]

On 18 February 1990, he was ordained bishop of the Eparchy (Diocese) of Alexandria for Egypt and Sudan by the imposition of the hands of His Beatitude Jean Pierre XVIII. From 1992 to 1997, as member of the Catholic Hierarchy of Egypt, he was the General Secretary of the Pastoral Council of the Catholic Church of Egypt.[1]

As a member of the Synod of the Bishops of the Catholic Armenian Patriarch Church, he was:

In October 1999, he was elected by the Bishops of the Holy Synod of the Catholic Armenian Synod, Catholicos Patriarch of Cilicia of Armenian Catholics and took the name Nerses Bedros XIX.[1]