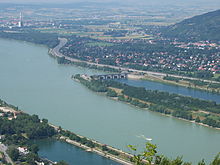 The New Danube (German Neue Donau) is a side channel on the eastern side of the Danube in Vienna, Austria. It was created to provide flood relief by containing excess water.[1] The Donauinsel (Danube Island), made out of the removed material,[2] separates the new waterway from the main channel of the river. The project was referred to by the United Nations Human Settlements Programme (UN-HABITAT) as "the first truly multipurpose fully sustainable flood protection scheme."[3]

The New Danube flows parallel to the river for approximately 21 kilometres (13 mi)[3] through the Vienna metropolitan area. It diverges from the main channel in Langenzersdorf in Lower Austria (northwest of the city), flows through the 21st district, and rejoins it at the Danube-Auen National Park in the 22nd district (in the southeast). The channel is about 150 m wide; the island varies between 70 and 210 m in width.[3] The current course of the New Danube and the site of the Danube Island were previously a broad landscape of meadows set aside as a floodplain in the first effort to manage Danube floods, in 1868–75. The left, northern bank of the New Danube is protected by the Hubertus Dam (Marchfeld Protective Dam), completed in 1875.

Following disastrous flooding in Vienna in 1954, years of discussion led to a new plan for regulating the Danube involving creating a relief channel and a long barrier island.[4] Construction began in 1972[5] and was completed only in 1988.

At the beginning of the New Danube is a weir known as the influx building (Einlaufbauwerk), which is normally closed, making the New Danube a still body of water.[6] When the Danube rises, it is opened to relieve pressure on the river and prevent flooding. This usually leads to a ban on swimming in the New Danube lasting for as long as several weeks, until the water quality improves. Further weirs are located just upstream of the Prater Bridge (Weir 1) and on the level of the Lobau oil terminal (Weir 2),[7] approximately 1.5 km before the New Danube rejoins the main channel.

The New Danube can be reached via U-Bahn lines U6 (Neue Donau station) and U1 (Donauinsel station), via tram line 31 across the Floridsdorf Bridge, and via various city bus lines. It has stretches suitable for regattas—in September 2009 the World Rowing Masters Regatta took place there[8]—and a waterski lift. The best known stretch of shoreline is the Copa Cagrana, next to the Reichsbrücke. Private motorboats are not permitted on the New Danube.

This article incorporates information from this version of the equivalent article on the German Wikipedia.