Neukölln (locality)
Berlin-Neukölln redirects here: If you are looking for the district, see Neukölln.

Neukölln is an inner-city locality (Ortsteil) of Berlin in the homonymous borough (Bezirk) of Neukölln, including the historic village of Rixdorf and numerous Gründerzeit apartment blocks. The Ortsteil is densely settled a with a population of 154,127 inhabitants (2009) and is the most populated one of Berlin. It is characterized by a high percentage of immigrants, especially of Turkish and Arab descent. In the past few years, northern Neukölln, frequently known as Kreuzkölln, has undergone a transformation and has seen a huge influx of students and artists as the area becomes increasingly popular.[1]

The locality is situated in the north of the Neukölln borough, adjacent to Kreuzberg (in Friedrichshain-Kreuzberg) at the Landwehrkanal. It also borders with Alt-Treptow, Plänterwald and Baumschulenweg (all part of Treptow-Köpenick) in the east and Tempelhof (in Tempelhof-Schöneberg) in the west, separated by the vast field of the former Tempelhof Airport. In the south, the Stadtring motorway forms the border with the Britz locality.

The Sonnenallee, connecting Neukölln at Hermannplatz with Baumschulenweg in former East Berlin was the site of a border crossing of the Berlin Wall, perpetuated by the 1999 Sonnenallee comedy film.

When first mentioned in 1360 the village south-east of Berlin, around the present-day Richardplatz, was called Richardsdorf and owned by the Order of St. John; hence the coat of arms of the current city borough bears the Maltese cross. It may have been the site of a former stronghold erected by the dissolved Knights Templar at neighbouring Tempelhof. 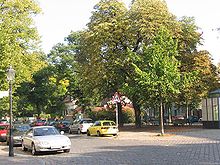 In 1737, King Frederick William I of Prussia allowed about 350 Moravian Protestants expelled from Bohemia to settle in the area, then called Rixdorf. They built their own church and houses off the village centre along the road to Berlin, today called Richardstraße. This new Bohemian village (Böhmisch Rixdorf) was granted its own constitution in 1797.

In 1863 a Turkish cemetery was laid out north of Rixdorf, the successor of a smaller burial ground in Kreuzberg established in 1798 for the Turkish members of the Prussian Army. It contains the mortal remains of the Ottoman ambassador Giritli Ali Aziz Efendi, the exiled Grand Vizier Mehmed Talat and Bahattin Şakir.

When both parts of the village were reunited in 1874, the place had 8,000 inhabitants, growing to 15,000 the next year. On May 1, 1899 Rixdorf, then the largest village of Prussia, received the status of an independent city and had become notorious for its taverns and amusement sites. In 1912, the local authorities tried to get rid of this reputation by assuming the current name derived from the Old Cölln part of medieval Berlin - an attempt that ultimately failed. Neukölln's independence ended in 1920 when it was incorporated into Greater Berlin. From 1945 to 1990, it was part of the American sector of West Berlin.