The Nissan 370Z (known as the Fairlady Z in Japan) is a sports car manufactured by Nissan Motors.[1] It was announced on October 29, 2008 and was first shown at an event in Los Angeles ahead of the 2008 Greater LA Auto Show,[2] before being officially unveiled at the show itself.[3][4] The 370Z is the sixth-generation of the Nissan Z-car line, succeeding the 350Z.

Almost every piece and component of the 370Z has been redesigned from the previous model (350Z). It is powered by the VQ37VHR 3.7 L (230 cu in) DOHC V6 with Variable Valve and Lift Control and produces 332 bhp (248 kW; 337 PS). Power delivery to the rear wheels comes through a new 7-speed automatic transmission with paddle shifters or 6-speed manual transmission which features the world's first synchronized down shift rev-matching system, SynchroRev Match. The SynchroRev Match system is only available with the sports package. The differential offered with the Sport Package is indicated to be a viscous limited slip differential.

The coefficient of drag is 0.30 and 0.29 with the Sport Package, figures identical to the 350Z. Nissan has also changed the clutch and brakes of the 350Z for the 370Z. The brakes have been changed from the more expensive Brembo racing brakes to Nissan branded brakes which are manufactured by Akebono.

The vehicle went on sale in September 2009 for £31,650 (manual) or £33,050 (automatic).[7] A North American version, consisting solely of Chicane Yellow paint(2009 only), is otherwise identical to 370Zs. Chicane Yellow was available for an extra $500 in North America with other colors available standard at no additional charge. 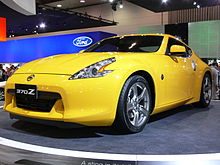 The convertible model was introduced for the 2010 year model. It features a soft-top roof, although automotive magazines originally said it would have a retractable hardtop.[5]

The 0–60 mph acceleration times are as follows:

The Nissan 370Z is featured in Electronic Arts' Need for Speed: Undercover video game which was released on November 18, 2008.[14] This allowed people to drive the 370Z in-game prior to the vehicle's actual release. Nissan claimed it to be the first time an automaker had a vehicle world premiere by partnering with a video game company.[15] It was featured in the Xbox 360 racing simulator Forza Motorsport 3, and featured in the Playstation 3 driving simulator game Gran Turismo 5, it was also featured in Need for Speed: Hot Pursuit. The 370Z also made its debut on the arcade racing game Wangan Midnight Maximum Tune 3DX.