In geometry, a Kepler–Poinsot polyhedron is any of four regular star polyhedra. They may be obtained by stellating the regular convex dodecahedron and icosahedron, and differ from these in having regular pentagrammic faces or vertex figures.

The four Kepler–Poinsot polyhedra are illustrated above. Each is identified by its Schläfli symbol, of the form {p, q}, and by its name. One face of each figure is shown yellow and outlined in red.

In all cases, two faces can intersect along a line that is not an edge of either face, so that part of each face passes through the interior of the figure. Such lines of intersection are not part of the polyhedral structure and are sometimes called false edges. Likewise where three such lines intersect at a point that is not a corner of any face, these points are false vertices. The images below show golden balls at the true vertices, and silver rods along the true edges.

For example the small stellated dodecahedron has 12 pentagram faces with the central pentagonal part hidden inside the solid. The visible parts of each face comprise five isosceles triangles which touch at five points around the pentagon. We could treat these triangles as 60 separate faces to obtain a new, irregular polyhedron which looks outwardly identical. Each edge would now be divided into three shorter edges (of two different kinds), and the 20 false vertices would become true ones, so that we have a total of 32 vertices (again of two kinds). The hidden inner pentagons are no longer part of the polyhedral surface, and can disappear. Now the Euler relation holds: 60 − 90 + 32 = 2. However this polyhedron is no longer the one described by the Schläfli symbol {5/2, 5}, and so can not be a Kepler–Poinsot solid even though it still looks like one from outside.

A Kepler–Poinsot polyhedron covers its circumscribed sphere more than once, with the centers of faces acting as winding points in the figures which have pentagrammic faces, and the vertices in the others. Because of this, they are not necessarily topologically equivalent to the sphere as Platonic solids are, and in particular the Euler relation

does not always hold. Schläfli held that all polyhedra must have χ = 2, and he rejected the small stellated dodecahedron and great dodecahedron as proper polyhedra. This view was never widely held.

A modified form of Euler's formula, using polyhedral density (D) and polygon density of the vertex figures (dv) and faces (df) was given by Arthur Cayley, and holds both for convex polyhedra (where the correction factors are all 1), and the Kepler–Poinsot polyhedra:

Relationships among the regular polyhedra

If the intersections are treated as new edges and vertices, the figures obtained will not be regular, but they can still be considered stellations. (See also List of Wenninger polyhedron models) 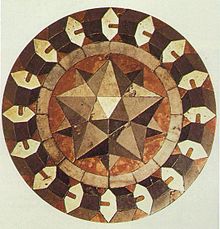 Most, if not all, of the Kepler-Poinsot polyhedra were known of in some form or other before Kepler. A small stellated dodecahedron appears in a marble tarsia (inlay panel) on the floor of St. Mark's Basilica, Venice, Italy. It dates from the 15th century and is sometimes attributed to Paolo Uccello. In his Perspectiva corporum regularium (Perspectives of the regular solids) [1], a book of woodcuts published in the 16th century, Wenzel Jamnitzer depicts the great dodecahedron and the great stellated dodecahedron. It is clear from the general arrangement of the book that he regards only the five Platonic solids as regular, and does not understand the regular nature of his great dodecahedra.

The small and great stellated dodecahedra, sometimes called the Kepler polyhedra, were first recognized as regular by Johannes Kepler in 1619. He obtained them by stellating the regular convex dodecahedron, for the first time treating it as a surface rather than a solid. He noticed that by extending the edges or faces of the convex dodecahedron until they met again, he could obtain star pentagons. Further, he recognized that these star pentagons are also regular. In this way he constructed the two stellated dodecahedra. Each has the central convex region of each face "hidden" within the interior, with only the triangular arms visible. Kepler's final step was to recognize that these polyhedra fit the definition of regularity, even though they were not convex, as the traditional Platonic solids were.

In 1809, Louis Poinsot rediscovered Kepler's figures, by assembling star pentagons around each vertex. He also assembled convex polygons around star vertices to discover two more regular stars, the great icosahedron and great dodecahedron. Some people call these two the Poinsot polyhedra. Poinsot did not know if he had discovered all the regular star polyhedra.

Three years later, Augustin Cauchy proved the list complete by stellating the Platonic solids, and almost half a century after that, in 1858, Bertrand provided a more elegant proof by facetting them.

The following year, Arthur Cayley gave the Kepler–Poinsot polyhedra the names by which they are generally known today.

A hundred years later, John Conway developed a systematic terminology for stellations in up to four dimensions. Within this scheme, he suggested slightly modified names for two of the regular star polyhedra:

Conway's names have seen some use but have not been widely adopted.

Regular star polyhedra first appear in Renaissance art. A small stellated dodecahedron is depicted in a marble tarsia on the floor of St. Mark's Basilica, Venice, Italy, dating from ca. 1430 and sometimes attributed to Paulo Ucello. Wenzel Jamnitzer published his book of woodcuts Perspectiva Corporum Regularium in 1568. He depicts the great dodecahedron and the great stellated dodecahedron - this second is slightly distorted, probably through errors in method rather than ignorance of the form. However there is no evidence that these artists understood the regularity of such figures.

In the 20th Century, Artist M. C. Escher's interest in geometric forms often led to works based on or including regular solids; Gravitation is based on a small stellated dodecahedron.

A dissection of the great dodecahedron was used for the 1980s puzzle Alexander's Star.

Norwegian artist Vebjørn Sands sculpture The Kepler Star is displayed near Oslo Airport, Gardermoen. The star spans 14 meters, and consists of an icosahedron and a dodecahedron inside a great stellated dodecahedron.