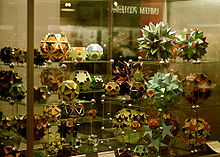 A display of uniform polyhedra at the Science Museum in London 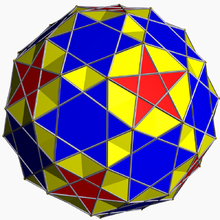 The small snub icosicosidodecahedron is a uniform star polyhedron, with vertex figure 35.5/2

The nonconvex forms are constructed from Schwarz triangles.

All the uniform polyhedra are listed below by their symmetry groups and subgrouped by their vertex arrangements.

Note: For nonconvex forms below an additional descriptor Nonuniform is used when the convex hull vertex arrangement has same topology as one of these, but has nonregular faces. For example an nonuniform cantellated form may have rectangles created in place of the edges rather than squares. 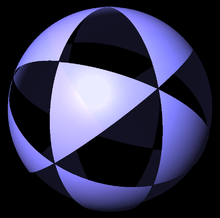 There are two nonconvex forms, the tetrahemihexahedron and octahemioctahedron which have tetrahedral symmetry (with fundamental domain Mobius triangle (3 3 2)). 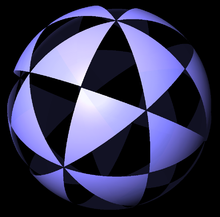 There are 8 convex forms, and 10 nonconvex forms with octahedral symmetry (with fundamental domain Mobius triangle (4 3 2)). 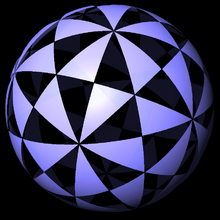 There are 8 convex forms and 46 nonconvex forms with icosahedral symmetry (with fundamental domain Mobius triangle (5 3 2)). (or 47 nonconvex forms if Skilling's figure is included). Some of the nonconvex snub forms have reflective vertex symmetry.

One further nonconvex polyhedron is the Great disnub dirhombidodecahedron, also known as Skilling's figure, which is vertex-uniform, but has pairs of edges which coincide in space such that four faces meet at some edges. It is sometimes but not always counted as a uniform polyhedron. It has Ih symmetry.

Coxeter identified a number of degenerate star polyhedra by the Wythoff construction method, which contain overlapping edges or vertices. These degenerate forms include: