On 22 January 1878 the ruler of Sulu, His Majesty Sultan Jamalul A'Lam, signed a treaty, under what he leased the territory of North Borneo to Gustavus von Overbeck, an Austrian who was then the Austro-Hungarian Empire's consul-general in Hong Kong and to his British partner Alfred Dent, residing in London, as representatives of the British North Borneo Company, without giving away his sovereign rights, and for as long as they desire to use these coastlines. Von Overbeck procured the necessary firearms and also promised to pay to His Majesty Jamalul A'Lam, his heirs and successors the sum of 5,000 dollars a year payable every year.

On 22 April 1903 His Majesty Sultan Jamalul Kiram signed a document known "Confirmation of cession of certain islands", under what he leased additional islands in the neighbourhood of the mainland of North Borneo from the island of Banggi to Sibuku Bay to British North Borneo Company. The sum 5,000 dollars a year payable every year increased to 5,300 dollars a year payable every year.

The key word in the both agreements was "pajak", which has been translated by American, Dutch and Spanish linguists to mean "lease" or "arrendamiento".

The Sulu Sultanate later came under the control of Spain in Manila. In 1885, Great Britain, Germany and Spain signed the Madrid Protocol to cement Spanish influence over the islands of the Philippines. In the same agreement, Spain relinquished all claim to North Borneo which had belong to the Sultanate in the past.[1]

WORLD WAR II : THE JAPANESE IMPERIAL ARMY INVASION OF NORTH BORNEO (SABAH) AND MOST OF THE TERRITORIES OF SOUTH EAST ASIA INCLUDING THE PHILIPPINES.

The Japanese invasion in December 1941 was a water-shed in Borneo's history. Although the island was primarily strategic importance to the Japanese, they rebuild the oil fields at Miri and Balikpapan (which had been sabotaged by the Allied Forces) for the use of their Navy, and extracted large quantities of timber from the forests.

There was little interference with people of the interior. By contrast, the Chinese population was trested with suspicion and sometimes extreme cruelty and rebellions against the Japanese at Jesselton and Pontianak were put down with savage brutality.

The surrender by the Japanese Army was taken by the Commander of Australia's 9th Division on 12th September 1945. In the meantime, Colonial Office officials in London had been deciding the future of British Borneo (Sabah). Sarawak and North Borneo (Sabah) were to be ceded to the British Crown by the Rajah of Sarawak and The Chartered Company, and a new Treaty of protection negotiated with the Sultan of Brunei. By July 1946, new colonial governments had been established in both Kuching and Jesselton. The people of North Borneo (Sabah) happily accepted the new colonial regime. 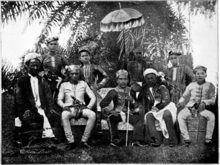 Sultan of Sulu and Suite

In 1906 and in 1920, the United States formally reminded Great Britain that North Borneo did not belong to the Crown and was still part of the Sultanate of Sulu. However, the British did turn Sabah into a Crown Colony.[2]

The Philippine Constitution of 1941 states that the national territory of the Philippines included, among other things, "all other areas which belong to the Philippines on the basis of historical rights or legal claims". Malaysia was federated in 16 September 1963. Even before Sabah was incorporated into Malaysia, the Philippines sent delegations to London reminding the British Crown that Sabah belonged to the Philippines.[3]

The Sultanate of Sulu was granted the north-eastern part of the territory as a prize for helping the Sultan of Brunei against his enemies and from then on that part of Borneo was recognized as part of the Sultan of Sulu's sovereignty. 1878 lease was continued until the independence and formation of the Malaysian federation in 1963 together with Singapore, Sarawak and the states of Malaya. As of 2004, the Malaysian Embassy to the Philippines had been paying cession/rental money amounting to US$1,500 per year (about 6,300 Malaysian ringgits) to the heirs of the Sultanate of Sulu.[4] This is an act of British government before the federation and continued to the today's government of Malaysia.[5]

Less than a decade later, the Sultanate of Sulu came under the control of Spain and was forced to sign a document giving all of the Sultan's Properties in Palawan and Sulu — excluding Northern Borneo — to Spain. In 1885, Spain relinquished all of its claim to Borneo to the British in the Madrid Protocol of 1885.[6]

On September 12, 1962, during President Diosdado Macapagal's administration (the father of the former Philippine president Gloria Macapagal-Arroyo), the territory of North Borneo, and the full sovereignty, title and dominion over the territory were ceded by the then reigning Sultan of Sulu, HM Sultan Muhammad Esmail E. Kiram I, to the Republic of the Philippines.[7] The cession effectively gave the Philippine government the full authority to pursue their claim in international courts. The Philippines broke diplomatic relations with Malaysia after the federation had included Sabah in 1963 but probably resumed it unofficially through the Manila Accord. It was revealed in 1968 that Ferdinand Marcos was training a team of saboteurs on Corregidor for infiltration into Sabah but instead Marcos betrayed the saboteurs in an event known as Jabidah massacre. Marcos later decided to drop the claim, but the aggrieved Malaysians insisted on such an explicit, humiliating public renunciation that no Philippine president could meet their conditions.[8]

Diplomatic ties were resumed in 1989 because succeeding Philippine administrations have placed the claim in the back burner in the interest of pursuing cordial economic and security relations with Kuala Lumpur.[9] To date, Malaysia continues to consistently reject Philippine calls to resolve the matter of Sabah's jurisdiction to the International Court of Justice.[10] Sabah sees the claim made by the Philippines' Moro leader Nur Misuari to take Sabah to International Court of Justice (ICJ) as a non-issue and thus dismissed the claim.[11]

In the years immediately before the formation of Malaysia, two commissions of enquiry visited North Borneo (along with neighbouring Sarawak) in order to establish the state of public opinion there regarding merger with Malaya (and Singapore).

It is important to note that neither commission was mandated with addressing the legal status of North Borneo; neither were they 'referendums' in the proper sense.[citation needed]Nevertheless, the commission was mandated at addressing self-determination of the people of Sabah, i.e., the right of the people of Sabah to freely determine their own political status and freely pursue their own economic, social and cultural development. The first commission, usually known as the Cobbold Commission was established by the Malayan and British governments and was headed by Lord Cobbold, along with two representatives of Malaya and Britain (but not either of the territories under investigation). The Commission found that 'About one third of the population of each territory [i.e. of North Borneo and of Sarawak] strongly favours early realisation of Malaysia without too much concern over terms and conditions. Another third, many of them favourable to the Malaysia project, ask, with varying degrees of emphasis, for conditions and safeguards... The remaining third is divided between those who insist upon independence before Malaysia is considered and those who would strongly prefer to see British rule continue for some years to come' [12].

Indonesia and the Philippines rejected the findings of the Cobbold. In 1963, a tripartite meeting was held in Manila between Indonesian president Soekarno, Philippines president Diosdado Macapagal and Malayan Prime Minister Tunku Abdul Rahman. The meeting agreed to petition the UN to send another commission of enquiry and the Philippines and Indonesia agreed to drop their objection to the formation of Malaysia if the new commission found popular opinion in the territories in favour. The UN Mission to Borneo was thus established, comprising members of the UN Secretariat from Argentina, Brazil, Ceylon, Czechoslovakia, Ghana, Pakistan, Japan and Jordan. The Mission's report, authored by UN Secretary-General U Thant found ‘a sizeable majority of the people' in favour of joining Malaysia. Although Indonesia and the Philippines subsequently rejected the report's findings – and Indonesia continued its semi-military policy of konfrontasi towards Malaysia – the report in effect sealed the creation of Malaysia.

In 1939, a court judgment on the claim had handed ownership of North Borneo to the heirs of the Sultanate before the formation of Malaysian federation in 1963. The judgment of Chief Justice C. F. C. Makaskie of the High Court of North Borneo in the civil suit filed by the late Dayang Dayang Hadji Piandao and eight other heirs of the Sultan of Sulu, including Datu Esmail E. Kiram (in 1950 he was crowned as Sultan Esmail E. Kiram) and Putli Tarhata Kiram, upheld the validity of the claim of the heirs.[13]

Sabah's position within Malaysia was reinforced by the ruling made by the International Court of Justice for Pulau Sipadan and Pulau Ligitan to remain under the jurisdiction and sovereignty of Malaysia rather than Indonesia. The Philippines had an application to intervene in the case of Sipadan Island and Ligitan Island, but was rejected by ICJ.[14] On basis of Malaysia effectivités on Sipadan Island and Ligitan Island, the judges concluded the sovereignty of both islands are under Malaysia. Also, from the case, it is allegedly that the sovereignty of both islands were passed down from the Sultan of Sulu to Spain, the United States, Great Britain on behalf of the State of North Borneo, the United Kingdom of Great Britain and Northern Ireland and finally to Malaysia. Even though this is not the reason that the islands fall into sovereignty of Malaysia because neither the parties having found to have treaty based title to Sipadan Island and Ligitan Island.[15]

Sabah's Chief Minister Musa Aman sees the claim made by the Philippines' Moro leader Nur Misuari to take Sabah to International Court of Justice (ICJ) as a non-issue and thus dismissed the claim.[16]