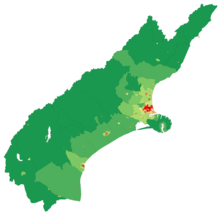 A map showing population density in the Canterbury Region at the 2006 census.

In 1848, Edward Gibbon Wakefield, a Briton, and John Robert Godley, an Anglo-Irish aristocrat, founded the Canterbury Association to establish an Anglican colony in New Zealand's South Island. The colony was based upon theories developed by Wakefield while in prison for eloping with a woman not-of-age. Due to ties to the prestigious Oxford University, the Canterbury Association succeeded in raising sufficient funds and recruiting middle-class and upper-class settlers.[2] In April 1850, a preliminary group led by Godley landed at Port Cooper—modern-day Lyttleton Harbour—and established a port, housing and shops in preparation for the main body of settlers. In December 1850, the first wave of 750 settlers arrived at Lyttleton in a fleet of four ships.[2]

Following 1850, the province's economy developed with the introduction of sheep farming. The Canterbury region's tussock plains in particular were suitable for extensive sheep farming. Since they were highly valued by settlers for their meat and wool, there were over half a million sheep in the region by the early 1850s. By the 1860s, this figure had risen to three million.[2] During this period, the architect Benjamin Mountfort designed many civic and ecclesiastical buildings in the Gothic Revival style.

The Canterbury Province was formed in 1853 following the passing of the New Zealand Constitution Act 1852 from the part of New Munster Province and covered both the east and west coasts of the South Island of New Zealand. The province was abolished, along with other provinces of New Zealand, when the Abolition of the Provinces Act came into force on 1 Nov 1876.[3]

Canterbury is New Zealand's largest region by area, with an area of 45,346 km². The region is traditionally bounded in the north by the Conway River and to the west by the Southern Alps. The southern boundary is the Waitaki River.

The Canterbury region’s economy is diversified into agriculture, industry, fishing, forestry, tourism and energy resources such as coal and hydropower.[4] Its agriculture sector is also diversified into dairy farming, sheep farming and horticulture particularly viticulture.[5] The strength of the region's agricultural economy is displayed every November at the Canterbury A&P Show. The show coincides with the regional anniversary day and Cup Week. During the interwar period, agricultural productivity was boosted by the introduction of mechanization, lime and the improvement of seed stocks. Canterbury is also New Zealand's main producer of cereal crops such as wheat, barley and oats. As of 2002, the region produced 60.7% of the nation's supply of wheat, 51.1% of its barley stocks and 43.7% of its supply of oats.[5]

The region's viticulture industry was established by French settlers in Akaroa. Since then, wine-growing is concentrated into two regions: Waipara and Burnham.[5] Recently there have been vintages from plantings from Kurow further to the south. White wine has typically predominated in Canterbury from Riesling, Sauvignon Blanc, Chardonnay, Gewürztraminer, and to a lesser extent Pinot Blanc and Pinot Gris. Pinot Noir has had some success in the province particularly in Waipara. 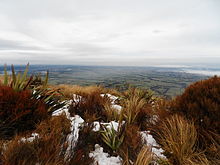 Like much of the Canterbury-Otago tussock grasslands the Canterbury Plains have been highly modified since human settlement and now support a large agricultural industry. Prior to the arrival of Māori settlers in the 13th century, much of the modern Canterbury region was covered in scrub and beech forests. Forest fires destroyed much of the original forest cover which was succeeded by tussock grassland. By the 19th century, only ten percent of this forest cover remained and the European settlers introduced several new exotic grass, lupin, pine and macrocarpa that gradually supplanted the native vegetation. Much of the native vegetation was isolated to the alpine zones and the Banks peninsular. Recently, the amount of forest on Banks Peninsula has increased from a minimum of about one percent of its original forest cover.

The amount of dairy farming is increasing with a corresponding increase in demand for water. Water use is now becoming a contentious issue in Canterbury. Lowland rivers and streams are generally polluted and some of the aquifers are being overdrawn. The Central Plains Water scheme is a proposal for water storage that has attracted much controversy. The Canterbury Water Management Strategy is one of the many means being used to address the water issue.

The Canterbury mudfish (kowaro) is an endangered species that is monitored by the Department of Conservation.

The Canterbury Region is covered by eleven parliamentary electorates which consists of ten general electorates and one Maori electorate. The city of Christchurch comprises five of these electorates. The Christchurch East, Christchurch Central and the Port Hills electorates are currently held by Labour Party members Lianne Dalziel, Brendon Burns and Ruth Dyson, respectively. Meanwhile Ilam is held by the governing National Party's Gerry Brownlee and Wigram is represented by Progressive Party's leader and sole-MP Jim Anderton. In contrast to Christchurch, much of the surrounding Canterbury region is dominated by the National Party due to its ties to rural farming and business interests. The sole exception to this is the Waimakariri electorate, which is represented by Clayton Cosgrove of the Labour Party.

Under the Maori seats system, Canterbury is part of the large Te Tai Tonga election which covers the entire South Island, the surrounding islands and most of Wellington in the North Island. It is currently held by the Maori Party MP Rahui Katene.

Following the 2006 Census, several boundary changes were implemented in the Canterbury region. Rakaia and Aoraki were renamed Selwyn and Rangitata respectively while the Banks Peninsula was reconstituted as the Port Hills. The large Kaikoura electorate covers all of the Marlborough Region and is represented by National MP Colin King. The substantial Waitaki electorate coveres most of South Canterbury and neighboring North Otago. Rangitata and Selwyn are held by National MPs Jo Goodhew and Amy Adams while Waitaki is represented by Jacqui Dean who also represents much of the Otago region with the exception of the Dunedin North and Dunedin South electorates.

The Canterbury region is governed by the Canterbury Regional Council which is divided into ten further territorial authorities including the Christchurch City Council and the Waitaki District which is divided between Canterbury and Otago. When the current local government structure was introduced in 1989, Kaikoura District was part of the Nelson-Marlborough Region. That region was later abolished and replaced with three unitary authorities. Kaikoura was too small to function as an independent unitary authority and was moved under the jurisdiction of the Canterbury Regional Council in 1992. However Kaikoura remains part of Marlborough in the minds of many people. In 2006, the Banks Peninsula District was merged into Christchurch City following a 2005 referendum.

The most popular sports are Rugby union and cricket.[citation needed] Canterbury is home to one of the most successful teams in Super 15 Rugby Competition; the Crusaders. The Crusaders also represent other provinces in the upper South Island, but are based in Christchurch. They were formerly known as the Canterbury Crusaders. In provincial rugby Canterbury is represented by three unions; Canterbury, Mid Canterbury and South Canterbury. For Historical reasons players from Kaikoura District still play for the Marlborough Rugby Union which is part of the Tasman Provincial team (Nelson/Marlborough Unions combined). The Canterbury Wizards are Canterbury's cricket team in New Zealand's State Championship. Other sporting teams include the Canterbury Tactix (Netball) and Canterbury United (Football).