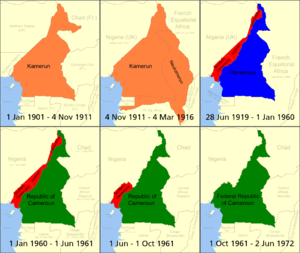 British Cameroons was a British Mandate territory in West Africa, now divided between Nigeria and Cameroon.

The area of present-day Cameroon was claimed by Germany as a protectorate during the "Scramble for Africa" at the end of the 19th century. During World War I, it was occupied by British, French and Belgian troops, and later mandated to Great Britain and France by the League of Nations in 1922. The French mandate was known as Cameroun and the British territory was administered as two areas, Northern Cameroons and Southern Cameroons. Northern Cameroons consisted of two non-contiguous sections, divided by where the Nigerian and Cameroun borders met.

French Cameroun became independent in January 1960, and Nigeria was scheduled for independence later that same year, which raised question of what to do with the British territory. After some discussion (which had been going on since 1959), a plebiscite was agreed to, and held on 11 February 1961. The Muslim-majority Northern area opted for union with Nigeria, and the Southern area voted to join Cameroon.[1]