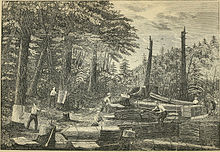 Tanbark is the bark of certain species of tree. It is traditionally used for tanning hides[1].

The words "tanning", "tan," and "tawny" are derived from the Medieval Latin tannare, "to convert into leather."

Bark mills are horse- or oxen-driven or water powered edge mills[2] and were used in earlier times to shred the tanbark to derive tannins for the leather industry.

A 'barker' was a person who stripped bark from trees to supply bark mills.

Tanbark around the world

In some areas of the United States, such as central Pennsylvania and northern California, tanbark is often called "mulch," even by manufacturers and distributors. In these areas, the word "mulch" may refer to peat moss or to very fine tanbark. In California, Lithocarpus densiflorus (commonly known as the tanoak or tanbark-oak) was used. In New York, on the slopes of Mount Tremper, hemlock bark was a major source of tanbark during the 19th century.

In America, condensed tannins are also present in the bark of blackjack oak (Quercus marilandica')[3].

Around the Mediterannean, sumach (Rhus coriaria) leaves and bark are used.

In Africa and Australia, acacia (called "wattle") bark is used by tanners.

Waterwheel at Combe House Hotel in Holford, Somerset, England. The overshot waterwheel was cast by Bridgwater ironfounder H Culverwell & Co in 1892 to replace an earlier wheel. It was used to grind oak bark for the tannery complex established here in the 1840s by James Hayman. When the tannery closed in 1900 the waterwheel was adapted to other uses such as grinding grain for grist, cutting chaff, chopping apples for the cider press and generating electricity. It also cracked stones in a nearby quarry. The gearing survives too.

In Europe, oak is a common source of tanbark. Quercitannic acid is the chief constituent found in oak barks[4]. The bark is taken from young branches and twigs in oak coppices and can be up to 4 mm thick; it is grayish brown on the outside and brownish red on the inner surface.[5]