Albania during the Balkan Wars

Albania during the Balkan Wars

Albania declared independence from the Ottoman Empire in 1912 and achieved full recognition the following year. This chapter of Albanian history was shrouded in controversy and conflict as the larger part of the self-proclaimed region had found itself controlled by the Balkan League states: Serbia, Montenegro and Greece from the time of the declaration until the period of recognition when Albania relinquished many of the lands originally included in the declared state. Since the proclamation of the state in November 1912, the Provisional Government of Albania successfully asserted its control over a part of central Albania including the important cities of Vlorë and Berat.

1912 was to be an eventful year in Rumelia. From August, the Ottoman Government recognized the autonomy of Albania.[1][2] In October 1912, the Balkan states, following their own national aspirations[3][4] jointly attacked the Ottoman Empire and during the next few months partitioned nearly all of Rumelia, the Ottoman territories in Europe, including those inhabited by the Albanians.[5] In November, with the outbreak of the First Balkan War, the Albanians rose up and declared the creation of an independent Albania, which included all of what is now Albania and Kosovo.[6]

The Serb army first entered Ottoman territory inhabited by ethnic Albanians in October 1912 as part of its campaign in the then-ongoing First Balkan War.[7] The Kingdom of Serbia occupied most of the Albanian-inhabited lands including Albania's Adriatic coast. Serbian Gen. Božidar Janković was the Commander of the Serbian Third Army during the military campaign in Albania. The Serbian army met with strong Albanian guerrilla resistance, led by Isa Boletini, Azem Galica and other military leaders. During the Serbian occupation, Gen. Jankovic forced notables and local tribal leaders to sign a declaration of gratitude to King Petar I Karađorđević for their "liberation by the Serbian army".[8]

During the occupation, the Serbian army committed numerous crimes against the Albanian population "with a view to the entire transformation of the ethnic character of these regions."[5] The Serbian government denied reports of war crimes.[8]

Following the signing of the Treaty of London in May 1913 which awarded new lands to Serbia, including most of the former Vilayet of Kosovo, the Serbian government agreed to withdraw its troops from outside of its newly expanded territory. This allowed an Albanian state to exist peacefully. The final withdrawal of Serb personnel from Albania was in October 1913. 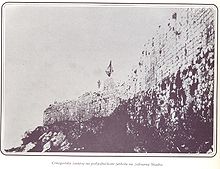 Scutari and its surrounding had long been desired by Montenegro, although its inhabitants were overwhelmingly ethnic Albanians. The Siege of Scutari took place on 23 April 1913 between the allied forces of Montenegro and Serbia against the forces of the Ottoman Empire and the Provisional Government of Albania.

Montenegro took Scutari on 23 April 1913, but when the war was over the Great Powers didn't give the city to the Kingdom of Montenegro, which was compelled to evacuate it in May 1913, in accordance with the London Conference of Ambassadors. The army's withdrawal was hastened by a small naval flotilla of British and Italian gunboats that moved up the Bojana River and across the Adriatic coastline.[10]

The Greek Army controlled territory that would be later incorporated into the Albanian state before the declaration of Albanian Independence in Vlorë. On 18 November 1912, after a successful uprising and 10 days prior to the Albanian Declaration of Independence, local Maj. Spyros Spyromilios expelled the Ottomans from the Himara region.[11] The Greek Navy also shelled the city of Vlora on 3 December 1912.[12][13] The Greek Army didn't capture Vlore, which was of great interest to Italy.[14]

Greek forces were stationed in what would become southern Albania until March 1914. After the Great Powers agreed on the terms of the Protocol of Florence in December 1913, Greece was forced to retreat from the towns of Korçë, Gjirokastër and Sarandë and the surrounding territories.[15]

Caricature shows Albania defending itself from neighboring countries. Montenegro is represented as a monkey, Greece as a leopard and Serbia as a snake. Text in Albanian: "Flee from me! Bloodsucker Beasts!"

Under strong international pressure, Albania's Balkan neighbors were forced to withdraw from the territory of the internationally recognized state of Albania in 1913. The new Principality of Albania included only about half of the ethnic Albanian population, while a large number of Albanians remained in neighboring countries.[16]