Occupy movement in the United States 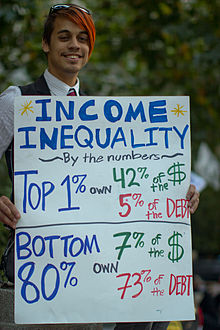 A Protester with a sign at Occupy San Francisco
See also: List of Occupy movement protest locations in the United States

The following is a list of the locations of some of the Occupy protests:

Occupy movements have taken place on college campuses across the United States. UC Berkeley,[29] San Francisco State University, UC Irvine,[30] and Harvard University[31] are some institutions of higher education that have held occupations in support of the Occupy movement. Occupy Texas State at Texas State University is one of the first to form amount[clarification needed] universities and colleges in Texas and is one of the largest with fifty dedicated members. At Saint Mary's College of California, held teach-ins to educate students on the Occupy movement and encourage them to get involved.[32]

An October 12–16 poll found that 67% of New York City voters agreed with the protesters and 87% believed that they had a right to protest.[33] A national poll conducted by Public Policy Polling released on November 16 shows 45% of Americans opposing the movement and 33% favoring it.[34] A Siena poll of New York released on November 15 shows that two-thirds of New Yorkers do not believe that the movement represents "the 99%". [35]

Impact on US Politics

US Presidential Candidate Buddy Roemer made headlines by becoming the first candidate to vocally support the Occupy Movement. [36]

Note. Cities with 'Occupy' articles are in the show-hide table below.