Ocean Bottom Seismometer (OBS) is a seismometer that is designed to record the earth motion under oceans and lakes from man-made sources and natural sources. 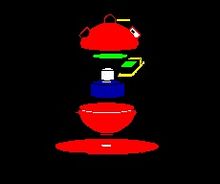 Sensors at the sea floor are used to observe acoustic and seismic events. Seismic and acoustic signals may be caused by different sources, by earth quakes and tremors as well as by artificial sources. Computing and analyzing the data yields information about the kind of source and, in case of natural seismic events, the geophysics and geology of the sea floor and the deeper crust. The deployment of OBS along a profile will give information about the deep structure of the Earth's crust and upper mantle in offshore areas.

OBS may be equipped with a maximum of a three-component geophone in addition to a hydrophone, and thus it needs a capacity of more than 144 Mbyte, which would be the minimum for an adequate MCS profiling. In a typical survey, the instruments should be operational for several days, which requires a data storage capacity of more than 500 Mbyte. Other experiments, such as tomographic investigations within a 3D-survey or seismological monitoring, demand even larger capacities. 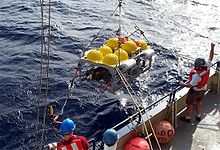 An ocean-bottom seismometer goes over the side of R/V Oceanus in early 2001, off Barbados. It will record long-period, low-frequency seismic waves for up to a year before the ship returns to retrieve the instrument. (Photo by John Whitehead, Woods Hole Oceanographic Institution)

The OBS consists of an aluminum sphere which contains sensors, electronics, enough alkaline batteries to last 10 days on the ocean bottom, and an acoustic release. The two sphere halves are put together with an O-ring and a metal clamp to hold the halves together. A slight vacuum is placed on the sphere to better ensure a seal. The sphere by itself floats, so an anchor is needed to sink the instrument to the bottom. In this case, the anchor is flat metal plate 40 inches (1.02 meters) in diameter. The instrument has been designed to be able to deploy and recover off almost any vessel. All that is needed (for deployment and recovery) is enough deck space to hold the instruments and their anchors and a boom capable of lifting an OBS off the deck and swing it over to lower it into the water. The OBS is bolted to the anchor and then dropped (gently) over the side.

Seismometers work using the principle of inertia. The seismometer body rests securely on the sea floor. Inside, a heavy mass hangs on a spring between two magnets. When the earth moves, so do the seismometer and its magnets, but the mass briefly stays where it is. As the mass oscillates through the magnetic field it produces an electrical current which the instrument measures.

The seismometer itself is a small metal cylinder; the rest of the footlocker-sized OBS consists of equipment to run the seismometer (a data logger and batteries), weight to sink it to the sea floor, a remote-controlled acoustic release and flotation to bring the instrument back to the surface.

The ground motion caused by earthquakes can be extremely small (less than a millimeter) or large (several meters). Small motions have high frequencies, so monitoring them requires measuring movement many times per second and produces huge amounts of data.

Large motions are much rarer, so instruments need to record data less frequently, to save memory space and battery power for longer deployments. Because of this variability, engineers have designed two basic kinds of seismometers:

They record high-frequency motions (up to hundreds of times per second). They can record small, short-period earthquakes and are also useful for studying the outer tens of kilometers of the seafloor. Technical details for two models: WHOI D2 and Scripps L-CHEAPO.

They record a much broader range of motions, with frequencies of about 10 per second to once or twice a minute. They are used for recording mid-sized earthquakes and seismic activity far from the instrument. Technical details for two models: WHOI long-deployment OBS and Scripps long-deployment OBS.

Very stable clocks make comparable the readings from many far-flung seismometers. (Without reliable time-stamps, data from different machines would be unusable.) Development of these clocks was a crucial advance for seismologists studying the Earth's interior.

After recovering an ocean-bottom seismometer, scientists can offload the instrument's data by plugging in a data cable. This feature saves the task of gingerly disassembling the instrument's protective casing while aboard a rolling ship.

The ability to connect a seismometer to a mooring or observatory makes the instrument's data instantly available. This is a huge advantage for geologists scrambling to respond to a major earthquake