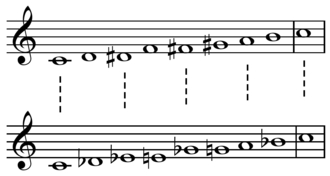 An octatonic scale is any eight-note musical scale. Among the most famous of these is a scale in which the notes ascend in alternating intervals of a whole step and a half step, creating a symmetric scale. In classical theory, in contradistinction to jazz theory, this scale is commonly simply called the octatonic scale, although there are forty-two other non-enharmonically equivalent, non-transpositionally equivalent eight-tone sets possible. In jazz theory this scale is more particularly called the diminished scale (Campbell 2001, p. 126), or symmetric diminished scale (Hatfield 2005, p. 125), because it can be conceived as a combination of two interlocking diminished seventh chords, just as the augmented scale can be conceived as a combination of two interlocking augmented triads. The earliest systematic treatment of the octatonic scale was Edmond de Polignac's unpublished treatise, "Etude sur les successions alternantes de tons et demi-tons (Et sur la gamme dite majeure-mineure)" from c. 1879 (Kahan 2009), which preceded Vito Frazzi's Scale alternate per pianoforte of 1930 by a full half-century (Sanguinetti 1993). The term octatonic pitch collection was first introduced into English by Arthur Berger in 1963 (Van den Toorn 1983).

The twelve tones of the chromatic scale partition into three non-overlapping diminished seventh chords. A combination of any two, omitting the third, forms an octatonic collection. As there are three diminished-seventh chords that can be omitted, it follows that there are only three distinct (non-transpositionally equivalent) diminished scales in the 12-tone system. Thus Olivier Messiaen considered it one of the modes of limited transposition, specifically, the second mode. A given diminished scale has only two modes: one beginning its ascent with a whole step between its first two notes, while the other begins its ascent with a half step or semitone.

Each of the three distinct scales can form differently named scales with the same sequence of tones by starting at a different point in the scale. With alternative starting points listed in parentheses, the three are:

Among the collection's remarkable features is that it is the only collection that can be disassembled into four transpositionally-related pitch pairs in six different ways, each of which features a different interval class (Cohn). For example:

Another remarkable feature of the diminished scale is that it contains first four notes of four minor scales separated by minor thirds. For Example: C, D, Eb, F and (enharmonically) F#, G#, A, B. Also Eb, F, Gb, Ab, and A, B, C, D.

Octatonic scales first occurred in Western music as byproducts of a series of minor-third transpositions. Agmon locates one in the music of Scarlatti, from the 1730s. Langlé's 1797 harmony treatise contains a sequential progression with a descending octatonic bass, supporting harmonies that use all and only the notes of an octatonic scale (p. 72, ex. 25.2).

The question of when Western composers first began to select octatonic scales as primary compositional material is difficult to determine. One strong candidate is a recurring theme in Franz Liszt's Feux Follets, the fifth of his first book of Études d'exécution transcendente (composed 1826, and twice revised). See descending arpeggiated figures of bars 7 and 8, 10 and 11, 43, 45 through 48, 122, and 124 through 126. In turn, all three distinct octatonic scales are used, respectively containing all, and only, the notes of each of these scales.

Liszt was to become an idol of the Russian school, and starting with Glinka's opera Ruslan and Lyudmila (first performed 1842) the diminished scale was often used by Russian composers to evoke scenes of magic and exotic mystery. Still, Nikolai Rimsky-Korsakov claimed the diminished scale as "his discovery" in his My Musical Life (van den Toorn 1983). He certainly used the scale extensively in his opera Kashchey the Immortal, which premiered in 1902. Following that, the scale was extensively used by his student Igor Stravinsky, particularly in his Russian period ballets Petrushka and The Rite of Spring dating from 1911 and 1913 respectively. Van den Toorn catalogues many octatonic moments in Stravinsky's music, although Tymoczko argues that many of them are byproducts of other syntactic concerns. The scale also may be found with some frequency in music of Claude Debussy, Maurice Ravel, Alexander Scriabin and Béla Bartók. In Bartók's Bagatelles, Improvisations, Fourth Quartet, Cantata Profana, and Improvisations, the octatonic is used with the diatonic, whole tone, and other "abstract pitch formations" (Antokoletz 1984) all "entwined...in a very complex mixture." Mikrokosmos 99, 101, and 109 are octatonic pieces, as is no. 33 of the Forty-Four Duos for two violins. "In each piece, changes of motive and phrase correspond to changes from one of the three octatonic scales to another, and one can easily select a single central and referential form of 8-28 in the context of each complete piece." However, even his larger pieces also feature "sections that are intelligible as 'octatonic music'" (Wilson 1992, p. 26–27).

Post-war composers who make significant use of the scale include Luigi Dallapiccola, Olivier Messiaen, Toru Takemitsu, and George Crumb. The Progressive Metal band Dream Theater also made use of the Octatonic scale in their 2005 song Octavarium.

Igor Stravinsky's ballet Petrushka is characterized by the so-called Petrushka chord, which combines major triads transpositionally related by a tritone. Taruskin's ascription of explanatory power to the chord's status as an octatonic subset has been challenged by Tymoczko.

In both of the short works by Bartók mentioned above ("Diminished Fifth" and "Harvest Song") the octatonic collection is partitioned into two (symmetrical) four-note segments (4-10 or 0235) of the natural minor scales a tritone apart. Paul Wilson argues against viewing this as bitonality since "the larger octatonic collection embraces and supports both supposed tonalities." (ibid, p. 27)

This is of particular interest to jazz musicians as it facilitates the creation of chord voicings, especially polychords (eg C/Gb or A/Eb) as expressing a dominant function on B7, F7, Ab7 and Cb7, and upper structure voicings on dominant seventh chords. The sequence of triads given above is an instance of the neo-Riemannian PR cycle, alternating parallels and relatives.

Two diminished seventh chords in the octatonic scale (one red, one blue) may be rearranged as the alpha chord

The alpha-chord collection is, "a vertically organized statement of the octatonic scale as two diminished seventh chords," such as: C♯–E–G–B♭–C–E♭–F♯–A. (Wilson 1992, p. 7)

One of the most important subsets of the alpha collection, the alpha chord (such as E–G–C–E♭; using the theorist Ernő Lendvai's terminology, the C alpha chord) may be considered a mistuned major chord or major/minor in first inversion (in this case, C major/minor). (ibid, p. 9)