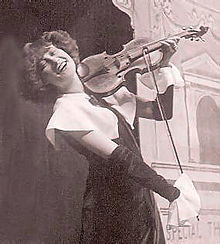 Odette Myrtil in The Bing Boys are Here, 1916

Odette Myrtil (June 28, 1898 — November 18, 1978)[1] was an American actress, singer, and violinist of French birth. She began her career as a violinist on the vaudeville stage in Paris at the age of 14. She expanded out into acting and singing, and had her first major success at the age of 18 on the London stage in the 1916 musical revue The Bing Boys Are Here. She was a staple in Broadway musical theatre productions from 1924-1932, after which she returned only periodically to Broadway up through 1960. She also appeared on the stages of Chicago, London, Los Angeles, and Paris several times during her career.

From 1923-72, Myrtil appeared as an actress in a total of 28 feature films; most of which were made from the mid 1930s through the mid 1950s. Not a leading lady on camera, she specialized in character roles and was often utilized for her gifts as a singer. She made only one television appearance during her career, in the Studio One in Hollywood 1953 episode The Paris Feeling. She also worked as a costume designer for 9 motion pictures from 1944-50.

Born Odette Belza in Paris, she was the daughter of two stage actors.[2] She studied the violin at a boarding school in Brussels and began performing the violin professionally at the age of 13. In 1915, at the age of 16, she came to the United States to join the Ziegfeld Follies on Broadway as one of the Ziegfeld Girls.[3] The following year she came to London where she was a major success in the West End show The Bing Boys Are Here. She spent the next several years appearing successfully on the London stage and in vaudeville productions in major European cities.[4]

In 1923 Myrtil returned to New York City as a vaudeville entertainer at the Palace Theatre where she had her first major success in America.[4] She became a staple of the theatre scene in New York City up into the early 1930s, often appearing in Broadway musicals which featured her abilities as both a singer and violinist. She had a particular triumph as Odette in Jerome Kern's 1931 musical The Cat and the Fiddle which was written specifically as a vehicle for her.[5] Thereafter she only made a handful of appearances on Broadway, with her last show being the original production of Harold Arlen and Johnny Mercer's Saratoga in 1960. She spent a couple years in the early 1950s portraying Bloody Mary in the original run of Rodgers and Hammerstein's South Pacific, having succeeded Juanita Hall in the role.[6]

After 1935, Myrtil's career decidedly shifted towards film, although she never left her live theatre roots. She had a fairly prolific career as a film actress, appearing in mainly mid-sized roles in a total of 25 films from 1936 to 1952. She had previously only appeared as a dancer in the 1923 film Squibs M.P. Her first speaking role was as Renée De Penable in Dodsworth (1936).[7]

Myrtil resided in New Hope, Pennsylvania during the majority of her later life. From 1955-58 she managed The Playhouse Inn, located next door to the Bucks County Playhouse. From 1961-76 she operated the New Hope restaurant Chez Odette which is now a different restaurant bearing her name, Odette's Restaurant.[2]

During her life, Myrtil was married twice: for eight years to vaudeville performer Robert Adams and later to film director and producer Stanley Logan.[8] She died in nearby Doylestown, Pennsylvania in 1978, aged 80.[2]