Bartolomé Esteban Murillo (born late December 1617, baptised January 1, 1618 – April 3, 1682) was a Spanish Baroque painter. Although he is best known for his religious works, Murillo also produced a considerable number of paintings of contemporary women and children. These lively, realist portraits of flower girls, street urchins, and beggars constitute an extensive and appealing record of the everyday life of his times.

Murillo was born in Seville, the youngest son in a family of fourteen. His father was a barber and surgeon. His parents died when Murillo was still very young, and the artist was largely brought up by his aunt and uncle. Murillo married Beatriz Cabrera in 1645; their first child, named Maria, was born shortly after their marriage. The mother and daughter became the subjects of two of his paintings; The Virgin of the Rosary[1][2] and Madonna and Child. 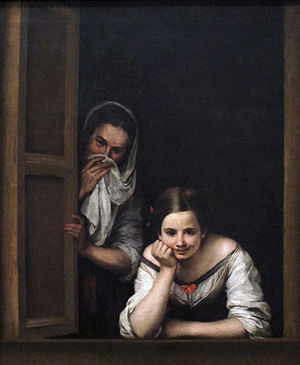 Two women at a window

Murillo began his art studies under Juan del Castillo in Seville. Murillo became familiar with Flemish painting; the great commercial importance of Seville at the time ensured that he was also subject to influences from other regions. His first works were influenced by Zurbarán, Jusepe de Ribera and Alonzo Cano, and he shared their strongly realist approach. As his painting developed, his more important works evolved towards the polished style that suited the bourgeois and aristocratic tastes of the time, demonstrated especially in his Roman Catholic religious works.

In 1642, at the age of 26 he moved to Madrid, where he most likely became familiar with the work of Velázquez, and would have seen the work of Venetian and Flemish masters in the royal collections; the rich colors and softly modeled forms of his subsequent work suggest these influences.[2] He returned to Seville in 1645. In that year, he painted thirteen canvases for the monastery of St. Francisco el Grande in Seville which gave his reputation a well-deserved boost. Following the completion of a pair of pictures for the Seville Cathedral, he began to specialize in the themes that brought him his greatest successes, the Virgin and Child, and the Immaculate Conception.[3]

After another period in Madrid, from 1658 to 1660, he returned to Seville, where he died. Here he was one of the founders of the Academia de Bellas Artes (Academy of Art), sharing its direction, in 1660, with the architect, Francisco Herrera the Younger. This was his period of greatest activity, and he received numerous important commissions, among them the altarpieces for the Augustinian monastery, the paintings for Santa María la Blanca (completed in 1665), and others. 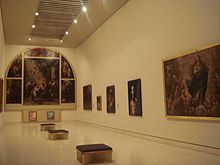 Murillo room in Museum of Cádiz

Murillo had many pupils and followers. The prolific imitation of his paintings ensured his reputation in Spain and fame throughout Europe, and prior to the 19th century his work was more widely known than that of any other Spanish artist.[2] His painting, Christ on the Cross is at the Timken Museum of Art, San Diego.[4]