Halsey The Old Halsey House in the spring of 2011 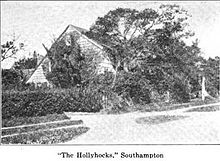 The Halsey House is an historical house converted into a museum, in Southampton, New York. It was first built around 1648 by Thomas Halsey, a pioneer from Hertfordshire, England. Thomas's grandfather was the honorable William Halsey. William had the famed English country house "The Golden Parsonage" bestowed upon him by Henry VIII in the 16th century. It is here that Thomas Halsey's father was born, as well as Thomas Halsey himself.

In 1630 Thomas Halsey sailed to the new world and was an original settler of the Massachusetts Bay Colonies (now greater Boston). In the 1640s he was one of the first Englishman to travel and settle the eastern end of Long Island.[1] In 1648, Thomas Halsey built what stands today as the Halsey House, sometimes referred to as, "the Hollyhocks". He lived there with his wife, Phoebe Halsey, who bore him seven children, (a descendant of one child is William F. Halsey, also known as 'Bull' Halsey, he was a great Admiral of the Fleet (five-star) of World War II). She, Phoebe, was scalped by Native Americans in 1649. The Halsey House is believed to be the oldest English-style house in the state of New York.[2] Today, it has been restored and is open to the public as a museum- filled with many of the same items that were owned by Thomas Halsey's family and other relics. The collection on display includes 17th- and 18th-century furnishings, a Dominy clock, and a rare 16th-century Breeches Bible, this version speaks of Adam and Eve wearing "breeches made of fig leaves." The Halsey estate in Southampton, New York, includes herb and flower gardens and an orchard that are overseen by the Southampton Colonial Society.

The Halsey House is also a common gathering place for social events, and a variety of programs open to the public.