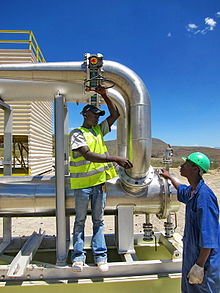 Geothermal power is very cost-effective in the Rift area of Kenya, East Africa. Kenya was the first African country to build geothermal energy sources. Kenya Electricity Generating Company (KenGen) has built two plants, Olkaria I (45 MW) and Olkaria II (65 MW), with a third private plant Olkaria III (48 MW). Plans are to increase production capacity by another 576 MW by 2017, covering 25% of Kenya's electricity needs, and correspondingly reducing dependency on imported oil. In Ethiopia there is another plant for geothermal power (in 2008 some experts from Iceland calculated that Ethiopia has at least 1000 MW of that energy). Hot spots have been found across the continent, especially in the Great Rift Valley.