Mendelian inheritance (or Mendelian genetics or Mendelism) is a scientific description of how hereditary characteristics are passed from parent organisms to their offspring; it underlies much of genetics. This theoretical framework was initially derived from the work of Gregor Johann Mendel published in 1865 and 1866 which was re-discovered in 1900; it was initially very controversial. When Mendel's theories were integrated with the chromosome theory of inheritance by Thomas Hunt Morgan in 1915, they became the core of classical genetics.

The laws of inheritance were derived by Gregor Mendel, a 19th century Austrian Priest/monk conducting hybridization experiments in garden peas (Pisum sativum).[1] Between 1856 and 1863, he cultivated and tested some 29,000 pea plants. From these experiments he deduced two generalizations which later became known as Mendel's Principles of Heredity or Mendelian inheritance. He described these principles in a two part paper, Experiments on Plant Hybridization that he read to the Natural History Society of Brno on February 8 and March 8, 1865, and which was published in 1866.[2]

Mendel's conclusions were largely ignored. Although they were not completely unknown to biologists of the time, they were not seen as generally applicable, even by Mendel himself, who thought they only applied to certain categories of species or traits. A major block to understanding their significance was the importance attached by 19th century biologists to the apparent blending of inherited traits in the overall appearance of the progeny, now known to be due to multigene interactions, in contrast to the organ-specific binary characters studied by Mendel.[1] In 1900, however, his work was "re-discovered" by three European scientists, Hugo de Vries, Carl Correns, and Erich von Tschermak. The exact nature of the "re-discovery" has been somewhat debated: De Vries published first on the subject, mentioning Mendel in a footnote, while Correns pointed out Mendel's priority after having read De Vries's paper and realizing that he himself did not have priority. De Vries may not have acknowledged truthfully how much of his knowledge of the laws came from his own work, or came only after reading Mendel's paper. Later scholars have accused Von Tschermak of not truly understanding the results at all.[1]

Regardless, the "re-discovery" made Mendelism an important but controversial theory. Its most vigorous promoter in Europe was William Bateson, who coined the term "genetics" and "allele" to describe many of its tenets. The model of heredity was highly contested by other biologists because it implied that heredity was discontinuous, in opposition to the apparently continuous variation observable for many traits. Many biologists also dismissed the theory because they were not sure it would apply to all species. However later work by biologists and statisticians such as R.A. Fisher showed that if multiple Mendelian factors were involved in the expression of an individual trait, they could produce the diverse results observed. Thomas Hunt Morgan and his assistants later integrated the theoretical model of Mendel with the chromosome theory of inheritance, in which the chromosomes of cells were thought to hold the actual hereditary material, and create what is now known as classical genetics, which was extremely successful and cemented Mendel's place in history.

Mendel's findings allowed other scientists to predict the expression of traits on the basis of mathematical probabilities. A large contribution to Mendel's success can be traced to his decision to start his crosses only with plants he demonstrated were true-breeding. He also only measured absolute (binary) characteristics, such as color, shape, and position of the offspring, rather than quantitative characteristics. He expressed his results numerically and subjected them to statistical analysis. His method of data analysis and his large sample size gave credibility to his data. He also had the foresight to follow several successive generations (f2, f3) of his pea plants and record their variations. Finally, he performed "test crosses" (back-crossing descendants of the initial hybridization to the initial true-breeding lines) to reveal the presence and proportion of recessive characters. Without his hard work and careful attention to procedure and detail, Mendel's work could not have had the impact it made on the world of genetics.

Mendel discovered that when crossing white flower and purple flower plants, the result is not a blend. Rather than being a mix of the two, the offspring was purple flowered. He then conceived the idea of heredity units, which he called "factors", one of which is a recessive characteristic and the other dominant. Mendel said that factors, later called genes, normally occur in pairs in ordinary body cells, yet segregate during the formation of sex cells. Each member of the pair becomes part of the separate sex cell. The dominant gene, such as the purple flower in Mendel's plants, will hide the recessive gene, the white flower. After Mendel self-fertilized the F1 generation and obtained the 3:1 ratio, he correctly theorized that genes can be paired in three different ways for each trait: AA, aa, and Aa. The capital "A" represents the dominant factor and lowercase "a" represents the recessive. (The last combination listed above, Aa, will occur roughly twice as often as each of the other two, as it can be made in two different ways, Aa or aA.)

Mendel stated that each individual has two factors for each trait, one from each parent. The two factors may or may not contain the same information. If the two factors are identical, the individual is called homozygous for the trait. If the two factors have different information, the individual is called heterozygous. The alternative forms of a factor are called alleles. The genotype of an individual is made up of the many alleles it possesses. An individual's physical appearance, or phenotype, is determined by its alleles as well as by its environment. An individual possesses two alleles for each trait; one allele is given by the female parent and the other by the male parent. They are passed on when an individual matures and produces gametes: egg and sperm. When gametes form, the paired alleles separate randomly so that each gamete receives a copy of one of the two alleles. The presence of an allele doesn't promise that the trait will be expressed in the individual that possesses it. In heterozygous individuals the only allele that is expressed is the dominant. The recessive allele is present but its expression is hidden.

Mendel summarized his findings in two laws; the Law of Segregation and the Law of Independent Assortment.

Law of Segregation (The "First Law")

More precisely the law states that when any individual produces gametes, the copies of a gene separate so that each gamete receives only one copy (allele). A gamete will receive one allele or the other. The direct proof of this was later found following the observation of meiosis by two independent scientists, the German botanist, Oscar Hertwig in 1876, and the Belgian zoologist, Edouard Van Beneden in 1883. In meiosis, the paternal and maternal chromosomes get separated and the alleles with the traits of a character are segregated into two different gametes.

The two coexisting alleles of an individual for each trait segregate (separate) during gamete formation so that each gamete gets only one of the two alleles. Alleles again unite at random fertilization of gametes.

The Law of Independent Assortment, also known as "Inheritance Law" states that separate genes for separate traits are passed independently of one another from parents to offspring. That is, the biological selection of a particular gene in the gene pair for one trait to be passed to the offspring has nothing to do with the selection of the gene for any other trait. More precisely the law states that alleles of different genes assort independently of one another during gamete formation. While Mendel's experiments with mixing one trait always resulted in a 3:1 ratio (Fig. 1) between dominant and recessive phenotypes, his experiments with mixing two traits (dihybrid cross) showed 9:3:3:1 ratios (Fig. 2). But the 9:3:3:1 table shows that each of the two genes are independently inherited with a 3:1 phenotypic ratio. Mendel concluded that different traits are inherited independently of each other, so that there is no relation, for example, between a cat's color and tail length. This is actually only true for genes that are not linked to each other.

Independent assortment occurs during meiosis I in eukaryotic organisms, specifically anaphase I of meiosis, to produce a gamete with a mixture of the organism's maternal and paternal chromosomes. Along with chromosomal crossover, this process aids in increasing genetic diversity by producing novel genetic combinations.

Of the 46 chromosomes in a normal diploid human cell, half are maternally-derived (from the mother's egg) and half are paternally-derived (from the father's sperm). This occurs as sexual reproduction involves the fusion of two haploid gametes (the egg and sperm) to produce a new organism having the full complement of chromosomes. During gametogenesis—the production of new gametes by an adult—the normal complement of 46 chromosomes needs to be halved to 23 to ensure that the resulting haploid gamete can join with another gamete to produce a diploid organism. An error in the number of chromosomes, such as those caused by a diploid gamete joining with a haploid gamete, is termed aneuploidy. 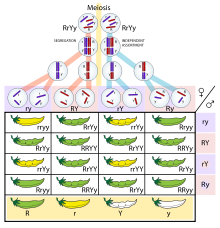 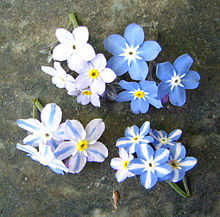 The reason for these laws is found in the nature of the cell nucleus. It is made up of several chromosomes carrying the genetic traits. In a normal cell, each of these chromosomes has two parts, the chromatids. A reproductive cell, which is created in a process called meiosis, usually contains only one of those chromatids of each chromosome. By merging two of these cells (usually one male and one female), the full set is restored and the genes are mixed. The resulting cell becomes a new embryo. The fact that this new life has half the genes of each parent (23 from mother, 23 from father for total of 46 in the case of humans) is one reason for the Mendelian laws. The second most important reason is the varying dominance of different genes, causing some traits to appear unevenly instead of averaging out (whereby dominant doesn't mean more likely to reproduce—recessive genes can become the most common, too).

There are several advantages of this method (sexual reproduction) over reproduction without genetic exchange:

A Mendelian trait is one that is controlled by a single locus and shows a simple Mendelian inheritance pattern. In such cases, a mutation in a single gene can cause a disease that is inherited according to Mendel's laws. Examples include sickle-cell anemia, Tay-Sachs disease, cystic fibrosis and xeroderma pigmentosa. A disease controlled by a single gene contrasts with a multi-factorial disease, like arthritis, which is affected by several loci (and the environment) as well as those diseases inherited in a non-Mendelian fashion. The Mendelian Inheritance in Man database is a catalog of, among other things, genes in which Mendelian traits cause disease.