OpenStack is an IaaS cloud computing project by Rackspace Cloud and NASA. Currently more than 120 companies have joined the project among which are Citrix Systems, Dell, AMD, Intel, Canonical, SUSE Linux, HP, and Cisco.[1] [2] It is free open source software released under the terms of the Apache License. 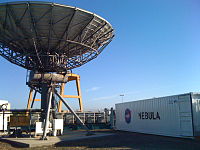 In July 2010, Rackspace Hosting and NASA jointly launched a new open source cloud initiative known as OpenStack. The mission of the OpenStack project is to enable any organization to create and offer cloud computing services running on standard hardware. The community's first official release, code-named Austin, was made available just 4 months later with plans to release regular updates of the software every few months.

OpenStack has a modular architecture that encompasses three components: [7]

OpenStack Compute (Nova) is a cloud computing fabric controller (the main part of an IaaS system). It is written in Python and utilizes many external libraries such as Eventlet (for concurrent programming), Kombu (for AMQP communication), and SQLAlchemy (for database access).

Some of the prominent users include: