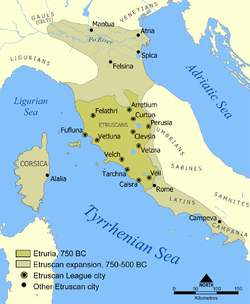 A map showing the extent of Etruria and the Etruscan civilization. The map includes the 12 cities of the Etruscan League and notable cities founded by the Etruscans.

There are two main hypotheses as to the origins of the Etruscan civilization in the Early Iron Age: autochthonous development in situ out of the Villanovan culture, or colonization of Italy from the Near East.[1] An autochthonous population that diverged genetically was suggested as a possibility by Cavalli-Sforza.[2]

The classification of the Etruscan language in the Tyrsenian family reflects this ambiguity. Etruscan is on one hand cognate to the Rhaetic language spoken in the Alps north of Etruria, suggesting autochthonous connections; on the other hand the Lemnian language found on the "Lemnos stele" is closely related to Etruscan, entailing either Etruscan presence in "Tyrsenian" Lemnos, or "Tyrsenian" expansion westward to Etruria.

The Etruscan language was of a different family from that of neighbouring Italic and Celtic peoples, who spoke Indo-European languages.[3]

Indeed, those probably come nearest to the truth who declare that the nation migrated from nowhere signal, but was native to the country, since it is found to be a very ancient nation and to agree with no other either in its language or in its manner of living.

With this passage Dionysius launched the autochthonous theory, that the core element of the Etruscans, who spoke the Etruscan language, were of "Terra (Earth) itself"; that is, on location for so long that they appeared to be the original or native inhabitants. They are therefore the owners of the Villanovan culture.[5]

...the history of the Etruscan people extends ... from c. 1200 to c. 100 BC. Many sites of the chief Etruscan cities of historical times were continuously occupied from the Iron Age 'Villanovan period on. Much confusion would have been avoided if archaeologists had used the name 'Proto-Etruscan' .... For in fact the people ... did not appear suddenly. Nor did they suddenly start to speak Etruscan.

An additional elaboration conjectures that the Etruscans were[7]

...an ethnic island of very ancient peoples isolated by the flood of Indo-European speakers.

In 1942 the Italian historian Massimo Pallottino published a book entitled The Etruscans (which would be released in English in 1955). Pallottino presented various hypotheses which gained wide acceptance in the archeological community. He said "no one would dream of asking where Italians or Frenchmen came from originally; it is the formation of the Italian and French nations that we study." He meant that the formation process for Etruscan civilization took place in the Etruria or nearby.[8] Formulating a different point of view on the same evidence, Pallottino says:[9]

...we must consider the concept 'Etruscan' as ... attached to ... a nation that flourished in Etruria between the eighth and first centuries BC .... We may discuss the provenance of each of these elements but a more appropriate concept ... would be that of formation ... the formative process of the nation can only have taken place on the territories of the Etruscans proper; and we are able to witness the final stages of this process.

J. P. Mallory compares the Etruscans to other remnant non Indo-European central Mediterranean populations, such as the Basques of the Iberian Peninsula and southern France, who absorbed the art styles and alphabet of their Greek neighbors.[10]

Certain Greek and Roman authors saw the presence of the Etruscans in Italy as an "historical problem," since they differed from the other ethnic groups in the area.

In Greco-Roman mythology, Aeneas (Greek: Αἰνείας, Aineías) was a Trojan hero, the son of prince Anchises and the goddess Venus. His father was also the second cousin of King Priam of Troy. The journey of Aeneas from Troy, (led by Venus, his mother) which led to the founding of the city of Rome, is recounted in Virgil's Aeneid. Aeneas is a character in Homer's Iliad and Quintus Smyrnaeus' Posthomerica. He is considered an important figure both in Greek and Roman legend and history.

Romulus and Remus, appearing in Roman mythology as the traditional founders of Rome, were of Eastern origin: their grandfather Numitor and his brother Amulius were descendants of fugitives from Troy.

Herodotus records the legend that the Etruscans (known to the Greeks as Tyrrhenians) came from Lydia in Asia Minor, modern Turkey[11] :

This is their story: [...] their king divided the people into two groups, and made them draw lots, so that the one group should remain and the other leave the country; he himself was to be the head of those who drew the lot to remain there, and his son, whose name was Tyrrhenus, of those who departed. [...] they came to the Ombrici, where they founded cities and have lived ever since. They no longer called themselves Lydians, but Tyrrhenians, after the name of the king's son who had led them there.

However Greek Historian Dionysius of Halicarnassus objected that the Tyrrhenian (Etruscan) culture and language shared nothing with the Lydian. He stated:[4]

For this reason, therefore, I am persuaded that the Pelasgians are a different people from the Tyrrhenians. And I do not believe, either, that the Tyrrhenians were a colony of the Lydians; for they do not use the same language as the latter, nor can it be alleged that, though they no longer speak a similar tongue, they still retain some other indications of their mother country. For they neither worship the same gods as the Lydians nor make use of similar laws or institutions, but in these very respects they differ more from the Lydians than from the Pelasgians.

Etruscan origins and the "Sea peoples"

The Etruscans or Tyrrhenians may have been one of the sea peoples of the 13th-14th century BC. There is no evidence that has been uncovered yet to settle the enigmatic Italian connections of these Sea Peoples to the Etruscans. The Etruscans, Rasna, does not lend itself to the Tyrrhenian derivation. Assertions in various articles and books that the Sherdens definitely were or were not from Sardis or some ancestor state have no foundation in the evidence. The Etruscan civilization has been studied, and the language partly deciphered. It has variants and representatives in Aegean inscriptions, but these may well be from travellers or colonists of Etruscans during their seafaring period before Rome destroyed their political and military power. In the 6th] to 5th centuries BC, the word "Tyrrhenians" was referred specifically to the Etruscans, for whom the Tyrrhenian Sea is named, according to Strabo.[12] In Pindar, the Tyrsanoi appear grouped with the Carthaginians as a threat to Magna Graecia:[13]

I entreat you, son of Cronus, grant that the battle-shouts of the Carthaginians and Etruscans stay quietly at home, now that they have seen their arrogance bring lamentation to their ships off Cumae.

Thucydides mentions them together with the Pelasgians and associates them with Lemnian pirates and with the pre-Greek population of Attica. Lemnos remained relatively free of Greek influence up to Hellenistic times, and interestingly, the Lemnos stele of the 6th century BC is inscribed with a language very similar to Etruscan. This has led to the postulation of a "Tyrrhenian language group" comprising Etruscan, Lemnian and Raetic.[14] There is thus evidence that there was indeed at least a linguistic relationship between the Lemnians and the Etruscans. The circumstances of this are disputed; a majority of scholars, at least in Italy, would ascribe Aegean Tyrrhenians to the Etruscan expansion from the 8th to 6th centuries, putting the homeland of the Etruscans in Italy and the Alps particularly because of their relation to the Alpine Raetic population.[15] Adherents of this latter school of thought point to the legend of Lydian origin of the Etruscans referred to by Herodotus, and the statement of Livy that the Raetians were Etruscans driven into the mountains by the invading Gauls. Critics of this theory point to the very scanty evidence of a linguistic relationship of Etruscan with Indo-European, let alone Anatolian in particular, and to Dionysius of Halicarnassus who decidedly argues against an Etruscan-Lydian relationship. However, the Indo-European Lydian language is first attested some time after the Tyrrhenian migrants are said to have left for Italy.[16]

In 2004 a team from Italy and Spain undertook a genetic study of the Etruscans, based on mitochondrial DNA (mtDNA) from 80 bone samples taken from tombs dating from the seventh century to the third century BC in Etruria.[17] This study found that the ancient DNA extracted from the Etruscan remains had some affininties with modern European populations including Tuscans in Italy. In addition the Etruscan samples possibly revealed more genetic inheritance from the eastern and southern Mediterranean than modern Italian samples contain. Hans-Jürgen Bandelt expressed concern about the methodology used in the study, saying "it is unclear to what extent the “Etruscan” data represent severely damaged or partly contaminated mtDNA sequences; therefore, any comparison with modern population data must be considered quite hazardous."[18]

A more recent study has suggested a Near Eastern origin.[19] The researchers conclude that their data, taken from the modern Tuscan population, 'support the scenario of a post-Neolithic genetic input from the Near East to the present-day population of Tuscany’. In the absence of any dating evidence there is however no direct link between this genetic input and the Etruscans.

A 2007 mtDNA study sampled a group from the Coriell Medical Institute containing DNA samples from a small town near Florence. The results found a Near Eastern cluster. However the samples were not considered to be genetically "atypical".[20][21]

Another study showed that the areas of historical Etruscan occupation share a relatively high concentration of y-haplogroup G with Anatolians, and the people of Caucasus, where the haplogroup reaches its greatest presence, particularly amongst the Ossetians and Georgians. This evidence is not specific to any period or calendar date, and might reflect contiguous populations or significant migration far back in the Stone Age.

Another team of Italian researchers showed that the mtDNA of cattle (Bos taurus) in modern Tuscany is different from that of cattle normally found elsewhere in Italy, and even in Europe as a whole.[22][23]. An autochthonous population that diverged genetically was suggested as a possibility by Cavalli-Sforza.[24] The mtDNA is similar to that of cattle typically found in the Near East. Many tribes who have migrated in the past have typically taken their livestock with them as they moved. This bovine mtDNA study suggests that at least some people whose descendants were Etruscans made their way to Italy from Anatolia or other parts of the Near East. However, the study gives no clue as to when they might have done so. There is the possibility that Etruscan civilization arose locally with maritime contacts from all across the Mediterranean, and the genetic presence could have been all along since the Neolithic and the expansion of the seaborne Cardium Pottery cultures of same origin.

Another study by geneticist Alberto Piazza of the University of Turin linked the Etruscans to Turkey. The team compared DNA sequences with those from men in modern Turkey, northern Italy, the Greek island of Lemnos, the Italian islands of Sicily and Sardinia and the southern Balkans. They found that the genetic sequences of the Tuscan men varied significantly from those of men in surrounding regions in Italy, and that the men from Murlo and Volterra were the most closely related to men from Turkey. In Murlo in particular, one genetic variant is shared only by people from Turkey.[25][26][27]