Oxygenation occurs when oxygen molecules (O2) enter the tissues of the body. For example, blood is oxygenated in the lungs, where oxygen molecules travel from the air and into the blood. Oxygenation is commonly used to refer to medical oxygen saturation.

The opposite of the process is called de-oxygenation. 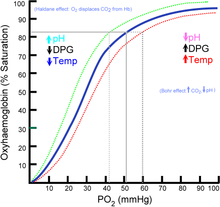 An SaO2 (arterial oxygen saturation) value below 90% causes hypoxemia (which can also be caused by anemia). Hypoxemia due to low SaO2 is indicated by cyanosis.

Venous oxygen saturation (SvO2) is measured to see how much oxygen the body consumes. Under clinical treatment, a SvO2 below 60% indicates that the body is in lack of oxygen, and ischemic diseases occur. This measurement is often used under treatment with a heart-lung machine (extracorporeal circulation), and can give the perfusionist an idea of how much flow the patient needs to stay healthy.

Tissue oxygen saturation (StO2) can be measured by near infrared spectroscopy. Although the measurements are still widely discussed, they give an idea of tissue oxygenation in various conditions.

Saturation of peripheral oxygen (SpO2) is an estimation of the oxygen saturation level usually measured with a pulse oximeter device. It can be calculated with the pulse oximetry according to the following formula:

Healthy individuals at sea level usually exhibit oxygen saturation values between 96% and 99%. An SaO2 (arterial oxygen saturation) value below 90% causes hypoxemia (which can also be caused by anemia). Hypoxemia due to low SaO2 is indicated by cyanosis, but oxygen saturation does not directly reflect tissue oxygenation. The affinity of hemoglobin to oxygen may impair or enhance oxygen release at the tissue level. Oxygen is more readily released to the tissues when pH is decreased, body temperature is increased, arterial partial pressure of carbon dioxide (PaCO2) is increased, and 2,3-DPG levels (a byproduct of glucose metabolism also found in stored blood products) are increased. When the hemoglobin has greater affinity for oxygen, less is available to the tissues. Conditions such as increased pH, decreased temperature, decreased PaCO2, and decreased 2,3-DPG will increase oxygen binding to the hemoglobin and limit its release to the tissue.[1]