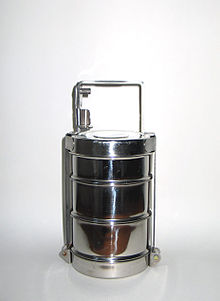 A dabba, or Indian-style tiffin box.

Tiffin carriers or dabbas are a kind of lunch box used widely in India for tiffin meals. They were also used in Singapore and Malaysia during the 1950s-60s, and were known as tingkat.[1] Normally they come in two to three tiers. Tiffin carriers are opened by unlocking a small catch on either side of the handle, then removing it. In the Indian city of Mumbai there is a complex low-tech system of delivering dabbas to city office-workers from their suburban homes by delivery teams known as dabbawalas.

Tiffin carriers are generally made out of steel, but enamel versions have been made by European companies. They can keep food warm for at least two or three hours.