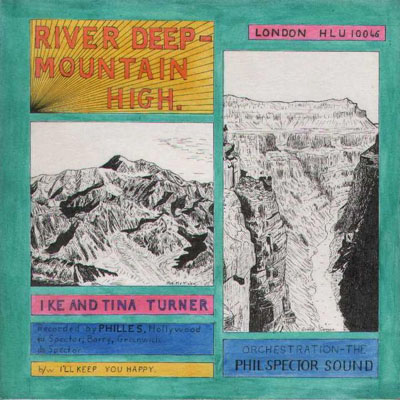 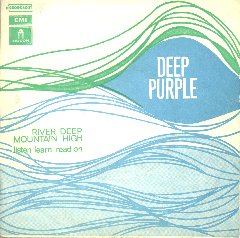 "River Deep - Mountain High" is a 1966 single by . Considered by producer to be his best work [Ribowsky, Mark. "He's A Rebel." Cambridge, MA: Perseus, 2007.] , "River Deep - Mountain High" was commercially unsuccessful upon its original release in the , but was a huge hit in , peaking at #3 in the . It was re-released in 1969, and has since become one of Tina Turner's signature songs.

The single was among the first recordings that Ike & Tina Turner did for Phil Spector's . Spector was well aware of 's controlling attitude in the studio, and resultantly drew up an unusual contract: the "River Deep - Mountain High" album and single would be credited to "Ike & Tina Turner", but Ike was not to be allowed in the studio, and only 's vocals would be used on record Fact|date=June 2008.

The terms were agreed to, and Spector began recording the LP, brandishing his full "" production technique to support Tina's strong voice. "River Deep - Mountain High" cost a then-unheard of 22,000, and required two dozen session musicians and background vocalists. Written by Spector, , and , "River Deep - Mountain High" compared a woman's love to the love that a child feels for a doll, or a puppy feels for his master. Tina Turner promises to "love [her man] just the way I loved that rag doll", and to love her man just like the puppy he had as a child did.

When the single and album were finally released, however, the public did not quite know what to make of it. "River Deep - Mountain High" was considered "too black for white radio, but too white for black radio" Fact|date=June 2008. The single stalled out at #88 on the pop charts, effectively crushing Spector's spirit and causing him to shut the label down.

The single had better fortune in the United Kingdom, however, peaking at #3 in the singles charts on first release. It was only held off the #1 spot by singles from The Beatles and The Kinks. George Harrison declared that it was "a perfect record from start to finish".

In 1967, (who had worked with Spector as a songwriter early in his career) released a of the song on his first album, "". This was followed by an epic, ten-minute version recorded by for their 1968 album, "". An edited version was released as a single in the United States and reached #53 in early 1969 and #42 on the Canadian RPM charts. The original Ike and Tina Turner version of the song was re-released the same year to a more receptive public and since then has gained the recognition Spector wanted from the record. Numerous versions have been recorded since, including two different recordings by Ike and Tina Turner that do not feature Spector's "Wall of Sound" production style, as well as some by Tina Turner herself without Ike Turner.

performed an instrumental version of these song in there 1970 album .

The most successful cover was a 1970 duet between the post- Supremes and . Produced by Nickolas Ashford and Valerie Simpson, the single was one of several recordings that paired the two groups. The Supremes/Four Tops cover, included on the 1970 LP "", peaked at #14 on the in 1971, making it the highest-charting version of the song in the United States.

Australian punk band The Saints did a wilder version on their "" EP, which is also included in the "All Times Through Paradise" box set. Another Australian band, , did a cover version.

also covered the song in the early '70s, which can be found on their compilations "Grease" and .

also did an extended cover version on their album "Mongrel". did a cover of this song on his early '90s album "Soul Deep". His delivery is very powerful and soulful POV-statement|date=September 2008, much like Tina's 1960s version.

A live cover was performed by Céline Dion on the "", which resulted in a studio version for her "Falling into You" album.
covered the song for the TV series , where she portrayed Tina Turner as well.

Tarisai Vushe performed this song in the semi finals of Australian Idol 2007 Series 5.

The English synth pop duo covered the song on their 1988 album, "".

The covered the song in their album, which hit No. 1 on the UK charts during .

performed the song live on her Special and released the audio track on the "" EP.

A live cover was performed by Céline Dion on the "", which resulted in a studio version for her "Falling into You" album. She performed this song from November 2006 until the end of her show in Las Vegas in December 2007 being one of the best moments of the show.The song is part of her currently as well.

On April 22, 2008, Mary Wilson (who recorded it a a Supreme with the 4 Tops in 1971) took the stage with Australian vocal group Human Nature, on the Seven Network television show It Takes Two. They performed two duets from Human Nature's Get Ready album: "It Takes Two" and "River Deep, Mountain High".

*In his novels, mentions a version of "River Deep, Mountain High" sung by the as "cavern deep, mountain high". It is believed by the characters in the novel to be one of the more original pieces of traditional dwarvish music.
*Art Brut's "Post Soothing Out," includes the lyrics: "River deep and mountain high / There's some lyrics that'll never apply / 'Cause I don't lie awake at night / With thoughts of river depth or mountain height"
*Sting claims to have lost his virginity to this song. [ [http://www.webwombat.com.au/entertainment/dvds/tturn60.htm DVD & Movie Reviews: Tina Turner: Celebrate! ] ]
* sang a duet version of the song with former backup singer Karla Devito for his concert "Live at the Bottom Line"

*Lead vocals by
*Written by , , and
*Produced by
*Arranged by
*Instrumentation by keyboards, Saxophone, guitar, guitar, drums, bass