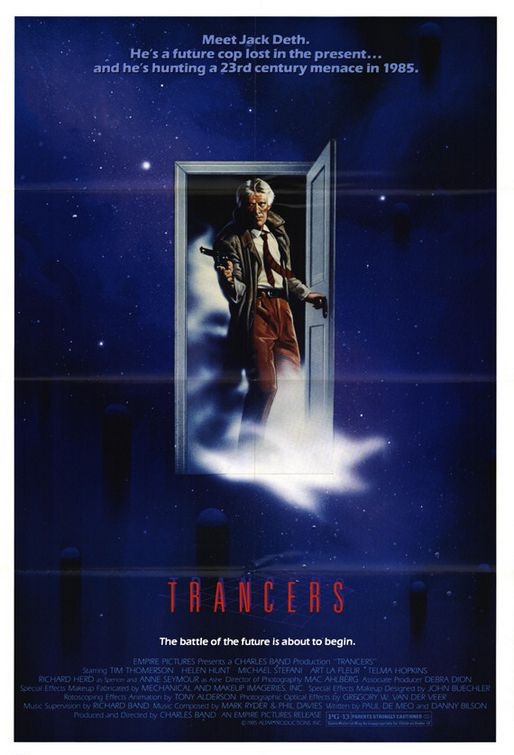 Tagline: "His name is Deth. He hunts Trancers. Even in the 20th Century."

Jack Deth, (), is a police trooper in the year 2247 who has been hunting down Martin Whistler (), a criminal mastermind who uses strange powers to make people into zombies and carry out his every desire. Deth can identify a tranced victim, (who appear normal at first, but once triggered, become savage killers), by scanning them with a special bracelet.

Before he can be caught, Whistler escapes back in time. Using a bizarre drug-induced time travelling technique, Whistler leaves his body in 2247 and travels down his ancestral bloodline arriving in 1985. His ancestor at that time is a police detective named Weisling.

Once Deth discovers what Whistler has done, he destroys Whistler's body (effectively leaving him trapped in the past with no vessel to return to) and chases after him through time the same way, ending up in the body of one of his ancestors, a journalist named Phil Deth.

With the help of a girl named Leena (), Phil's girlfriend, Deth goes after Whistler who has begun to "trance" other victims and plots to eliminate the future governing council members of Angel City, (the future name of Los Angeles), who are being systematically wiped out of existence by Whistler's murder spree of their own ancestors.

Deth arrives late and must now safeguard Hap Ashby (), a washed-up former pro player, who is the ancestor of the last surviving council member, Chairman Ashe. Deth is given some high-tech equipment which is sent to him in the past: his sidearm, (which contains two hidden vials of time drugs to send him and Whistler back to the future), and a "long-second" wristwatch, which temporarily slows time stretching one second to ten. The watch has only enough power for one use. He receives another watch through time later to pull the same trick again.

During the fight with Whistler, one of the drug vials in Jack's gun breaks, leaving only one vial to get home. Now Jack must make a choice to kill Weisling (who is possessed by the evil Whistler), or use the vial to send Whistler back up to 2247. Jack injects Weisling with the last vial, sending Whistler home with no body to return to effectively destroying him. Jack decides to remain with Leena in 1985.

This film uses a method of : People can travel back in time by injecting themselves with a drug which allows them to briefly take over the body of an ancestor. When Jack Deth arrives in 1985, he is in the body of his ancestor, a journalist; Whistler assumes control of his ancestor, a police detective; and Deth's supervisor, McNulty, borrows the form of his own forebear, a young girl.

Because of Helen Hunt's rise to fame in the 1990s, the DVD re-releases of the first two films have Helen Hunt's name listed first, then Tim Thomerson, Michael Stefani and respectively. Many other low budget films featuring unknown cast members (at the time) such as "" and "Leprechaun" have used this tactic to gain sales when the stars of those films went on to major projects. [ [http://www.amazon.com/Trancers-Tim-Thomerson/dp/6305741352 Amazon.com: Trancers: Tim Thomerson, Helen Hunt, Michael Stefani, Art LaFleur, Telma Hopkins, Richard Herd, Anne Seymour, Miguel Fernandes, Biff Manard, Peter Schrum, Barbara ... ] ]