Mukah Division is one of the eleven administrative divisions in Sarawak, east Malaysia, on the island of Borneo. It was established on March 1, 2002 and it has a total area of 6,997.61 square kilometers[2].

As a relatively new division in Sarawak, Mukah identifies seven core development sectors. The sectors are as follows; 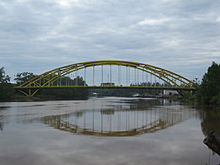 The Batang Mukah Bridge, one of the most notable structures of Mukah.

After a few years, the division has completed a coastal road that connects Kuala Balingian/Balingian/Mukah/Dalat/Oya/Igan/Matu/Daro. Furthermore, there are two higher education institutes in the division; UiTM Mukah campus and Mukah Polytechnic. Also, there is a coal power plant built in Matadeng, some 30 km from the Mukah town. A RM 48 million, 170 meters double-arch suspension bridge over Batang Mukah was opened to public on 16 September 2005[4]. 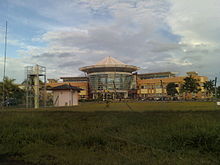 Meanwhile, in Belawai, the fishery sector is being focused. There is Tanjung Manis Deep Sea Fishery Complex to support the sector. Tanjung Manis also connected to Sibu via Serdeng/Tanjung Manis/Bruit/Sg.Nai Road and Sibu/Bawang Assan/Serdeng Road.

The fishery industry is synonym with Mukah town too. The Melanaus are fish lovers and fish are incorporated in traditional dishes, for example umai. Mukah town even has statues of Ikan Merah(Red Snapper) and Udang(Prawn) that suggests the importance of the industry to the town and the division wholly.

Mukah offers a different tourism attraction in Sarawak. Being the only Melanau-majority town, the Melanau culture is the best that Mukah has to offer. There is a grand Kaul Festival (Pesta Kaul in Malay) held annually at Kala Dana Beach (Pantai Kala Dana in Malay) at Mukah. A park called Kala Dana Recreation Park or Site of Kaul Festival (Tapak Pesta Kaul) was built there and had recently been renovated and is now more modern. It also has an observation tower. This festival attracts many visitors from Sarawak-wide and sometimes even foreign tourists. The chief minister also attends this festival each year.

Some of the places of interest in Mukah Division are:

In 1996, the Mukah Light Industrial Estate was established by the Mukah river, about 3 km from the Mukah town. The planned area covers 61 hectares. The other industrial estate in Mukah Division is the Tanjung Manis Timber Processing Zone developed by Sarawak Timber Industry Development Corporation (STIDC)[5].