Documentary photography usually refers to a popular form of photography used to chronicle significant and historical events. It is typically covered in professional photojournalism, but it may also be an amateur, artistic, or academic pursuit. The photographer attempts to produce truthful, objective, and usually candid photography of a particular subject, most often pictures of people.

The term documentary applied to photography antedates the mode or genre itself. Photographs meant to accurately describe otherwise unknown, hidden, forbidden, or difficult-to-access places or circumstances date to the earliest daguerreotype and calotype "surveys" of the ruins of the Near East, Egypt, and the American wilderness areas. Nineteenth century archaeologist John Beasly Greene, for example, traveled to Nubia in the early 1850s to photograph the major ruins of the region;[1] One early documentation project was the French Missions Heliographiques organized by the official Commission des Monuments historiques to develop an archive of France's rapidly-disappearing architectural and human heritage; the project included such photographic luminaries as Henri Le Secq, Edouard Denis Baldus, and Gustave Le Gray.

In the United States, photographs tracing the progress of the American Civil War by photographers for at least three consortia of photographic publisher-distributors, most notably Mathew Brady and Alexander Gardner, resulted in a major archive of photographs ranging from dry records of battle sites to harrowing images of the dead by Timothy O'Sullivan and evocative images by George N. Barnard. A huge body of photography of the vast regions of the Great West was produced by official government photographers for the Geological and Geographical Survey of the Territories (a predecessor of the USGS), during the period 1868–1878, including most notably the photographers Timothy O'Sullivan and William Henry Jackson.[2]

Both the Civil War and USGS photographic works point up an important feature of documentary photography: the production of an archive of historical significance, and the distribution to a wide audience through publication. The US Government published Survey photographs in the annual Reports, as well as portfolios designed to encourage continued funding of scientific surveys.

The development of new reproduction methods for photography provided impetus for the next era of documentary photography, in the late 1880s and 1890s, and reaching into the early decades of the 20th century. This period decisively shifted documentary from antiquarian and landscape subjects to that of the city and its crises.[3] The refining of photogravure methods, and then the introduction of halftone reproduction around 1890 made low cost mass-reproduction in newspapers, magazines and books possible. The figure most directly associated with the birth of this new form of documentary is the journalist and urban social reformer Jacob Riis. Riis was a New York police-beat reporter who had been converted to urban social reform ideas by his contact with medical and public-health officials, some of whom were amateur photographers. Riis used these acquaintances at first to gather photographs, but eventually took up the camera himself. His books, most notably How the Other Half Lives of 1890 and The Children of the Slums of 1892, used those photographs, but increasingly he also employed visual materials from a wide variety of sources, including police "mug shots" and photojournalistic images.

Riis's documentary photography was passionately devoted to changing the inhumane conditions under which the poor lived in the rapidly-expanding urban-industrial centers. His work succeeded in embedding photography in urban reform movements, notably the Social Gospel and Progressive movements. His most famous successor was the photographer Lewis Wickes Hine, whose systematic surveys of conditions of child-labor in particular, made for the National Child Labor Commission and published in sociological journals like The Survey, are generally credited with strongly influencing the development of child-labor laws in New York and the United States more generally.

In the 1930s, the Great Depression brought a new wave of documentary, both of rural and urban conditions. The Farm Security Administration, a common term for the Historical Division, supervised by Roy Stryker, funded legendary photographic documentarians, including Walker Evans, Dorothea Lange, Russell Lee, John Vachon, and Marion Post Wolcott among others. This generation of documentary photographers is generally credited for codifying the documentary code of accuracy mixed with impassioned advocacy, with the goal of arousing public commitment to social change.[4]

During the wartime and postwar eras, documentary photography increasingly became subsumed under the rubric of photojournalism. Swiss-American photographer Robert Frank is generally credited with developing a counterstrain of more personal, evocative, and complex documentary, exemplified by his work in the 1950s, published in the United States in his 1959 book, The Americans. In the early 1960s, his influence on photographers like Garry Winogrand and Lee Friedlander resulted in an important exhibition at the Museum of Modern Art [MoMA], which brought those two photographers together with their colleague Diane Arbus under the title, New Documents. MoMA curator John Szarkowski proposed in that exhibition that a new generation, committed not to social change but to formal and iconographical investigation of the social experience of modernity, had replaced the older forms of social documentary photography.

In the 1970s and 1980s, a spirited attack on traditional documentary was mounted by historians, critics, and photographers. One of the most notable was the photographer-critic Allan Sekula, whose ideas and the accompanying bodies of pictures he produced, influenced a generation of "new new documentary" photographers, whose work was philosophically more rigorous, often more stridently leftist in its politics. Sekula emerged as a champion of these photographers, in critical writing and editorial work. Notable among this generation are the photographers Fred Lonidier, whose 'Health and Safety Game" of 1976 became a model of post-documentary, and Martha Rosler, whose "The Bowery in Two Inadequate Descriptive Systems" of 1974-75 served as a milestone in the critique of classical humanistic documentary as the work of privileged elites imposing their visions and values on the dis-empowered.

Acceptance by the art world

Since the late 1970s, documentary photography has increasingly been accorded a place in art galleries alongside fine art photography. Luc Delahaye, Manuel Rivera-Ortiz and the members of VII Photo Agency are among many who regularly exhibit in galleries and museums.[5] 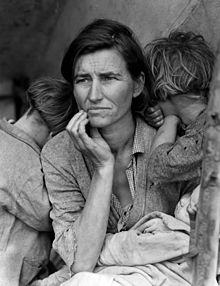 Migrant Mother, a famous photo by Dorothea Lange, taken during the Great Depression.