Colonel Allensworth State Historic Park is the only California town to be founded, financed and governed by African Americans. The small farming community was founded in 1908 by Lt. Colonel Allen Allensworth, Professor William Payne, William Peck, a minister; John W. Palmer, a miner; and Harry A. Mitchell, a real estate agent, dedicated to improving the economic and social status of African Americans. Uncontrollable circumstances, including a drop in the area's water table, resulted in the town's demise.[2] The "Allensworth Historic District" is listed on the National Register of Historic Places.

Of historical importance, the founder Colonel Allen Allensworth (1842–1914), had a friendship with Booker T. Washington (1856–1915), and was inspired by Tuskegee Institute and development in the neighboring town. Allensworth hoped to develop the "Tuskegee of the West".[3]

In 1968, Cornelius "Ed" Pope, a former resident of Allensworth, worked in Sacramento as a draftsman and planner for the California Department of Parks and Recreation. With the help of a professor at California State University, Sacramento, he wrote a proposal to restore the Allensworth settlement as a state historical site.[4][5] Finally, in 1974 then Governor Ronald Reagan authorized the department to establish the park. Colonel Allensworth State Historic Park was established on 240 acres (1.0 km2) in 1976. Ed Pope returned to the area (Earlimart, California) in his retirement, "to become a preservation activist on the scene".[6] The 100th anniversary of Allensworth was celebrated in October 2008.

The park had 7,843 visitors in fiscal year 2006, according to the state parks. Rededication activities are held throughout the year to commemorate the park's history.[7]

The preserved townsite features nine restored buildings, including a schoolhouse, a hotel, a general store and several homes. The park has a visitor center, and tours are available by making arrangements with the park in advance. The visitor center features a video presentation, "The Spirit of Allensworth," which is available for viewing from 10 a.m. to 4 p.m. daily. For more information read Colonel Allensworth SHP.

Fifteen campsites, open all year, accommodate RVs or tents. Each site includes a picnic table and a camp stove; flush toilets are nearby. Facilities for disabled people are available. Turf, trees, and shade ramadas are other features. A nearby picnic area is shaded by 75 large trees, planted by the California Conservation Corps.

The park is ten miles (16 km) southwest of Earlimart on County Road J22. From Highway 99, take County Road J22 west to Highway 43 south and turn into the park at Palmer Avenue. 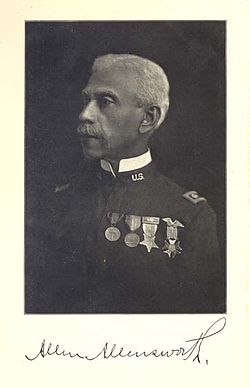 In the year 1908, United States Army veteran Lt. Colonel Allen Allensworth (1842–1914) and Professor William Payne (1877–1954)[8], Rev. William Peck and John W. Palmer, and Harry A. Mitchell sought to build a town where African Americans could own property, learn, and live the American Dream. They chose an 800-acre (3.2 km2) Tulare County site for a new town near the present location of Earlimart, California and about 45 driving miles north of Bakersfield. The site was chosen for fertile soil, adequate water, and its location along a railroad corridor. Black men and women — craftsmen, artisans, businessmen, farmers, ranchers, retired military — moved their families to the newly purchased land. In 1914, the California Eagle newspaper stated that Allensworth deeded land was worth more than $112,000.[9] The affairs of the town were administered by a council form of government known as the Allensworth Progressive Association, which directed the community through its formative and critical early years. Men and women held responsible positions in the community.

In 1910 Joshua and Henrietta Singleton opened the Singleton’s General Store & Post Office. The store sold a variety of merchandise and served as a weigh station for wagons. Allensworth Hotel was opened by Clara and John Morris; the hotel had 8 guestrooms and charged 75 cents per night.

In 1908 the southwest corner of Tulare County had abundant water from wells drilled into the then shallow water table. The artesian wells and water mains laid throughout the residences during and since 1912, were controlled by Allensworth Rural Water Company, a State corporation.[11] But water problems began developing in 1912 and by 1914 had become serious. The declining water tables throughout the area and increasing problems with alkali salts helped to doom the community. As the original settlers moved away, the land values declined, some of the houses were left empty, and others were rented or sold.

By the 1950s, Allensworth was an impoverished area without drinkable water supplies; its only water wells were contaminated with arsenic, and state health official declared them unusable. When the state acquired the land for park purposes, state officials said land owners were paid "market value" but because these values were so low, the state also provided financial assistance to relocate the former owners. According to State Park Ranger Greg Kauffman, "only two or three families were unhappy with the move". And, he said, "the project itself has received strong support".[12]

In 1919 Delilah L. Beasley wrote in her book The Negro Trail-Blazers of California: "The death of Colonel Allensworth was most tragic, because after passing through three wars, he was finally killed by a careless motorcyclist on the streets of Monrovia, California, a few miles out from Los Angeles, the accident occurring on a Sunday morning in September, 1914. The aged Colonel was on his way to preach in a small church of the village and had just stepped from a Pacific Electric street car when these men knocked him down and ran over him, killing him through their careless driving, his death, occurring within twenty-four hours afterwards without his regaining consciousness, was like a thunderbolt from a clear sky to the people of the State. He had spent the two years previous in dictating and assisting Professor Charles Alexander to write his autobiography."[13] The book had been sent to the publishers and was ready to come off the press when he was killed.

Allensworth was widely loved and respected, and received a military funeral by the Grand Army of the Republic veterans of Los Angeles. Memorial services held for him throughout the State and Nation. [14] He was interred at the Rosedale Cemetery on September 18, 1914. The Allensworth community was devastated. Although Professor William Payne and Oscar Overr assumed the leadership of the colony, no one could replace the colonel. Without Allensworth's spiritual guidance and leadership, the community began to disintegrate. By 1920, the two leading figures, William Payne and the widow Josephine Allensworth, had left the area. Payne accepted a teaching job at El Centro, while Mrs. Allensworth returned to Los Angeles to live with her daughter Nella. The exodus of residents continued during the years of the Great Depression and World War II.

Two rare 19th-century railroad boxcars, which are believed to have been the residence of the Station Agent at Allensworth, have been been restored by the California State Railroad Museum’s and are displayed at Colonel Allensworth State Historic Park. California State Parks contracted with the nonprofit museum in mid-2002 to conserve and restore the two railroad boxcar bodies associated with Allensworth. Wheels and axles had been removed after the turn of the 20th century; today the boxcars are today considered rare specimens of early railroad freight cars. For the project, one car was fully documented and received a museum-level conservation.[15]

The terrain is typical of the southern San Joaquin Valley. Excepting the railroad roadbed, there is less than five feet elevation difference across town. Like most of the valley, there has been some subsidence probably related to historic overpumping of ground water for irrigation.

The valley was historically the site of vernal pools and seasonal lakes before twentieth century diversions of water and agriculture. A natural gas well field exists west of town. Burrowing owls, a species active in daylight hours, are sometimes present in the park.[16]

Just North of Allensworth is the 6,833-acre (28 km2) grassland and wetland habitats Pixley National Wildlife Refuge, operated by the Department of the Interior, US Fish and Wildlife Service. Of great interest, thousands of Sandhill Cranes (Grus canadensis), use this refuge each winter from November through March. The Red-tailed Hawks (Buteo jamaicensis), also are among the 141 type of birds that can be seen here.[17]

Adjacent to the town is the Allensworth Ecological Reserve.[18] The endangered San Joaquin Kit Fox (Vulpes macrotis mutica) can be found in this area.[17]

In 2007, the State of California passed Assembly Bill 576, which established a 2.5-mile (4.0 km) dairy-free zone around the park. The bill was in response to two proposed dairies. Environmental activists protested that they were likely to have a potentially negative impact (dairy flies and odors) on the adjacent Pixley National Wildlife Refuge, Allensworth Ecological Reserve, and the historic park.[19]